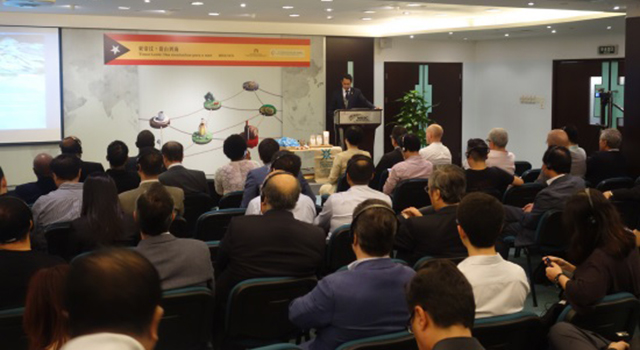 The “East Timor: From the mountains to the sea” Workshop took place on the afternoon of November 5, at Macao Trade and Investment Promotion Institute’s (IPIM) Macao Business Support Centre. IPIM and the Permanent Secretariat of the Forum for Economic and Trade Co-operation between China and Portuguese-speaking Countries (Macao) – also known as Forum Macao – jointly organised the event.

The aim was to enhance the services platform for economic and trade co-operation between China and Portuguese-speaking Countries, as well as to strengthen regional economic co-operation and to help small- and medium-sized enterprises (SME) from Macao and neighbouring regions to improve their knowledge on the Portuguese-speaking Countries’ markets.

More than 60 representatives from several economic and trade entities, as well as businesspeople and investors from different fields – including trade, retail, e-commerce, translation, banking, law, and education – took part in the event.

During the Workshop, IPIM’s Executive Director, Ms Glória Batalha Ung, noted that in the first eight months of 2015 bilateral trade between China and East Timor hit US$56 million, up by 52 percent from the prior-year period. Chinese exports to East Timor mainly included machinery, cars, iron and steel.

Several Timorese economic and trade organisations, trade associations and chambers of commerce have over the years provided support to Macao in organising conventions, exhibitions and other trade related activities. That was the case with Macao International Trade and Investment Fair (MIF) and Macao International Environmental Co-operation Forum and Exhibition (MIECF).

During the latest edition of MIF – which was held last month –, the Fair organisers installed the Portuguese-speaking Countries’ Products and Services Pavilion, with a floor space of more than 2,200 square metres. Out of the more than 150 booths there, 18 were from Timorese companies. These firms used MIF to organise promotion seminars and business matching sessions, in order to explore new opportunities for co-operation and business. They said they hoped to use Macao’s platform to introduce their products to Mainland China’s market, as well as to other parts of the world.

The Workshop held on November 5 allowed participants to learn more about the business environment and investment opportunities in East Timor. At the same time, it contributed to promote economic and trade co-operation between Macao and East Timor.

Mr Danilo Henriques, East Timor’s Representative to the Permanent Secretariat of Forum Macao, was a guest speaker at the Workshop. He introduced the investment environment and opportunities offered in the Timorese market. He also presented the “One Stop Shop” service – aimed at dealing with starting a business in East Timor – and the policies offering custom and tax benefits for periods ranging from five to 10 years, depending on the location of the investment.

Mr Daniel Groshong, representative of the Hummingfish Foundation, was also invited to share his experience in fields related to production, advertisement and sales of Maubere coffee and East Timor’s organic soap.

The Workshop also included a showcase of typical products from East Timor, including organic coffee, chocolate, coconut milk, salt and arts and crafts. It was an opportunity for participants in the Workshop to learn more about East Timor’s products and to identify potential business opportunities, aiming at promoting economic and trade development in both Macao and East Timor.