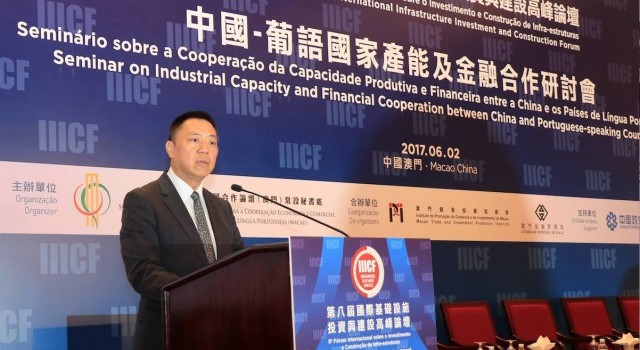 The “Seminar on Capacity Production and Finance Cooperation between China and Portuguese-speaking Countries,” organised by the Permanent Secretariat of Forum for Economic and Trade Co-operation between China and Portuguese-speaking Countries (Macao), took place at the Venetian Macao on June 2. The event – co-organised by the Macao Trade and Investment Promotion Institute and the Monetary Authority of Macao – was supported by China International Contractors Association.

A total of more than 200 people attended the Seminar, where the Secretary-General of Forum Macao, Ms Xu Yingzhen, and Macao’s Secretary for Economy and Finance, Mr Leong, both delivered speeches.

The Seminar, part of the 8th International Infrastructure Investment and Construction Forum, was an event aimed at strengthening the outcomes of the “Belt and Road Forum for International Cooperation” recently held in Beijing, as well as to take advantage of the 18 new measures announced by the Central Government last year for promoting economic and trade cooperation between China and Portuguese-speaking Countries. The Seminar was one of the outcomes of the signing of a memorandum of understanding on the promotion of capacity production and cooperation that occurred at the 5th Ministerial Conference of Forum Macao held in Macao in October 2016.

During the Seminar, representatives of various countries exchanged views on their respective policies, strategic planning, investment strategies, and natural resources. Issues such as financial reforms aimed at supporting projects contributing to the “Belt and Road” initiative as well as the development of a Macao financial sector with distinctive characteristics were also discussed at the Seminar. Seminar participants were also briefed about key projects of each of Forum Macao’s participating countries.

The Seminar was an important event for the participating countries as it sought to capture the historical opportunities from the implementation of the “Belt and Road” initiative, following on from the 5th Ministerial Conference of Forum Macao held last year. The Seminar followed the principles of: observing the interests of governments and private sectors in the countries concerned; respecting market rules; pragmatism; making gradual progress; and seeking mutual benefits.

All parties to the Seminar were encouraged to take advantage of the multilateral mechanism of Forum Macao to promote closer, pragmatic exchanges and cooperation in the areas of capacity production and financial cooperation between Mainland China, Macao and Portuguese-speaking Countries, making use of Macao’s advantages as a services platform for finance and trade cooperation between all those places.