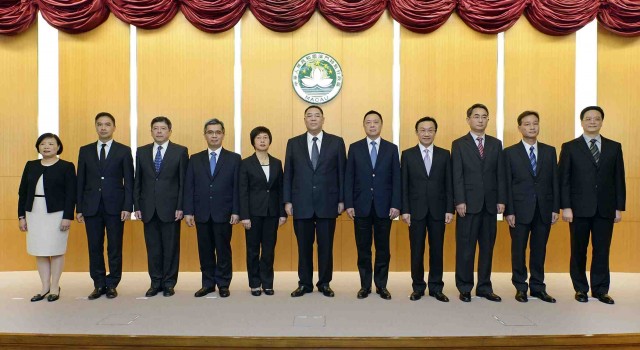 Macao’s Chief Executive Chui Sai On today announced members of his new cabinet who would serve with him as he embarks on his second as Chief Executive, describing them as relatively young and who would uphold the traditions and bring in vitality and innovation to the Government.

These designated officials, together with the Prosecutor General-designate, will assume their positions as Mr Chui is sworn in on 20 December to head the fourth-term government of the Macao Special Administrative Region. They met the press today at the Government Headquarters.

Mr Chui expressed his heartfelt gratitude to the Central Government for trusting him and endorsing his suggestions for the positions, and said both he and his cabinet would strive to serve the people, maintain social harmony, sustain pace of development and facilitate livelihood betterment.

Mr Chui admitted it was a tough decision to make since there were concerns that the leading officials would become conservative after taking office for too long, while the Basic Law does not specify the maximum tenure for these top positions.

But taking into account various factors and learning from the experience of the mainland and other regions, Mr Chui said he selected his team based on their qualifications, expertise and working experience.

He said the Government would consider revising tenure regulations for the principal officials and the Prosecutor General, to improve the system and serve as a reference to the forth-coming government team.

To the incumbent principal officials, Mr Chui expressed his most sincere appreciation for their contributions and efforts to Macao’s economy and social harmony.

In the 15 years since the establishment of the MSAR, Mr Chui and the team have gained friendship and have overcome numerous difficulties and challenges; but he admitted there was still room for improvement.

After the press conference led by the Chief Executive, the designated principal officials and Prosecutor General held individual briefing sections with the press, stating their appreciation of the appointments and sharing their policy vision and planning.