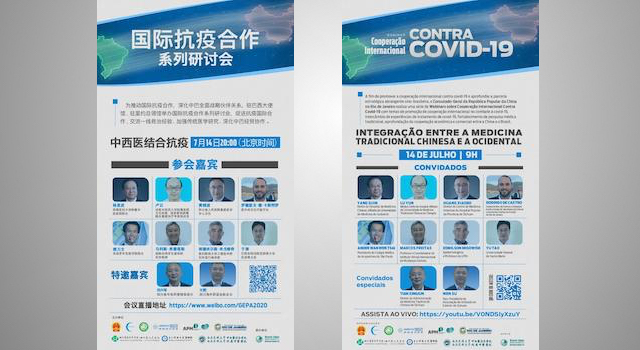 A second series of Webinars on International Cooperation Against Covid-19 is due to start today, aiming to promote international cooperation in the fight against the novel coronavirus responsible for the Covid-19 disease. A total of four sessions is planned for the second series. They will take place respectively on July 14, 21 and 28, and on August 4.

The second series is being put together by a number of bodies, including: China’s Embassy in Brazil; China’s Consulate-General in Rio de Janeiro; the Foreign and Overseas Chinese Affairs Office of the Sichuan Provincial People’s Government; and the State Government of Minas Gerais, in Brazil. The series aims to further international cooperation in the fight against Covid-19; to share information on front-line experience of tackling the pandemic; to promote research on traditional Chinese medicine; and to deepen economic and trade collaboration.

Interested parties can scan a QR code featured on a promotional poster (see below) in order to watch the live streaming of the Webinar.

The respective series of Webinars on International Cooperation Against Covid-19 are supported by the Permanent Secretariat of the Forum for Economic and Trade Co-operation between China and Portuguese-speaking Countries (Macao). Other supporting entities include: the National Academy of Medicine of Brazil; the Oswaldo Cruz Foundation; the Beijing Administration of Traditional Chinese Medicine; the Sichuan Administration of Traditional Chinese Medicine; the China Council for International Investment Promotion; the China-Brazil Business Council; the Association of Chinese Companies in Brazil; the China Chamber of Commerce for Import and Export of Medicines and Health Products; the China Association for Research and Advancement of Chinese Traditional Medicine; and the Beijing Hengji Health Management and Development Foundation.