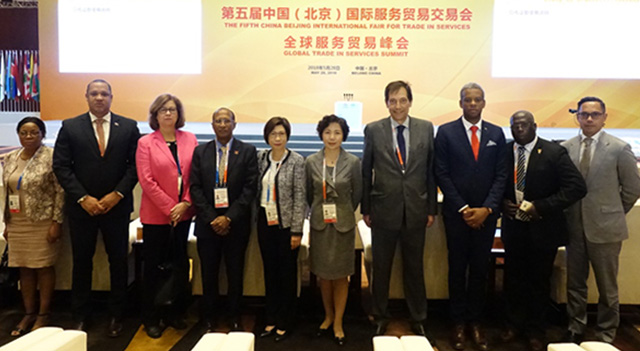 CIFTIS was organised by the Ministry of Commerce of the People’s Republic of China and the People’s Government of Beijing Municipality and was held from May 28 to June 1 at the China National Convention Center. This edition highlighted the “Belt and Road” initiative and the combined themes of “Opening up, Innovation, Integration”. The event focused on six major sectors: technology services; Internet and information services; cultural and education services; financial services; commercial and tourism services; and health and medical services, in order to engage actively with the “Belt, and Road” initiative, and to promote cooperation and development regarding trade in services between different countries and regions.

The Permanent Secretariat of Forum Macao invited the participants of two seminars – the “Seminar on Trade in Services between China and the Portuguese-speaking Countries” and the “Seminar on Infrastructure Construction in Portuguese-speaking Countries” – that were held in Macao, to join the Beijing event. This was in order to conduct fresh exchanges on topics involving trade in services, infrastructure construction and cooperation in production capacity.

This was the second time that the Permanent Secretariat of Forum Macao organised a large delegation involving various sectors and areas of economic activity in order to take part in economic and trade promotion activities held in Mainland China. The trip showcased the role of Forum Macao as a bridge and link between China and Portuguese-speaking Countries regarding economic, trade, education and human resources cooperation. The delegation attended several events at CIFTIS: the Opening Ceremony; the Summit; the Opening Ceremony of the 2018 China Electronic Commerce Conference; a thematic forum; and the Brazil Day. In addition, the delegation also visited the Macao Pavilion and other stands, and held exchanges with the participating companies.

The Permanent Secretariat’s purpose in organising a delegation to Beijing was to make the most of the advantages of Forum Macao, and of Macao’s “Platform” role for China and Portuguese-speaking Countries, and actively to complement the “Belt and Road” initiative and the existing spirit of cooperation between Beijing and Macao, in order to enhance the promotion of cooperation and development between China and Portuguese-speaking Countries on trade in services.