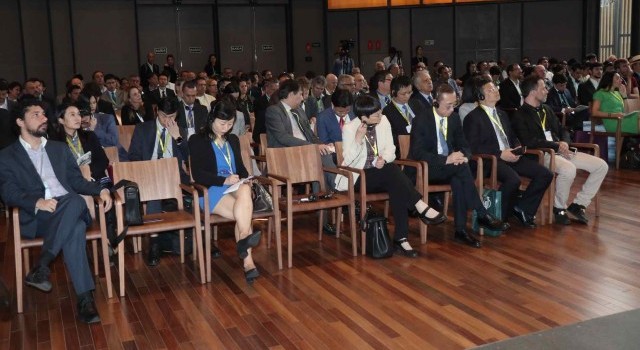 The Permanent Secretariat of the Forum for Economic and Trade Co-operation between China and Portuguese-speaking Countries (Macao), also known as Forum Macao, the Consulate-General of China in Rio de Janeiro, Brazil, the governments of the states of Rio de Janeiro and Espírito Santo, and the Brazil-China Business Council, co-organised on December 9 a seminar on innovation in international trade in services.

The seminar attracted more than 200 representatives of governments, business people and academics from China and Brazil. They included: the Vice Minister of Commerce of the People’s Republic of China (PRC), Mr Wang Bingnan; the Consul-General of China in Rio de Janeiro, Mr Li Yang; and the Secretary-General of the Permanent Secretariat of Forum Macao, Ms Xu Yingzhen. Also attending were: the Vice-President of the Industry Federation of the State of Rio de Janeiro, Mr Carlos Alexandre Jorge da Costa; the Secretary for Economic Development from the State of Rio de Janeiro, Mr Lucas Tristão; the Under Secretary for Investment and Value Chain Promotion at the State Government of Minas Gerais, Mr Juliano Alves Pinto; the Secretary for Development of the State of Espírito Santo, Mr Marcos Kneip Navarro; the Mayor of Mangaratiba, Mr Alan Campos da Costa; and the President of the Brazil-China Business Council, Mr Luiz Augusto Castro Neves.

In his opening remarks, Mr Wang said China and Brazil were the nations most representative of developing countries – and of major emerging economies – in respectively the East and the West, and had bright prospects for bilateral cooperation. Cooperation between the two sides regarding trade in services, had been on a rising path, with progress achieved in several areas.

They included: technology; blockchain; cross-border e-commerce; and the internationalisation of the yuan. This would bring new vitality to cooperation in trade in services between China and Brazil. China was willing to expedite the healthy development of Forum Macao – as a multilateral cooperation mechanism – in order to facilitate specifically China’s bilateral economic and trade cooperation with Brazil, and to strengthen the coordination of multiple matters between the two sides.

Secretary-General Xu said the world economy was undergoing a new round of major development, major changes, and major adjustments: the development of, and cooperation in, trade in services had increasingly become a new driving force for global economic development. The seminar was focusing on “innovation” in international trade in services, a topic of paramount importance for all economies – in particular those of developing countries – for the ability of such trade to transform economic development, optimise industrial structures and generate momentum for new development.

Mr Li hoped each of Brazil’s states could bring about improvement in finance, business, and the social and security environment, guaranteeing basic protection for inbound capital and a smooth flow of trade. The Consulate-General of China in Rio de Janeiro would continue to play a bridging role in the cooperation between China and Brazil, thus facilitating the cooperation of innovation in trade in services, strengthening the understanding between people on both sides, and deepening the friendship of the two nations.

The seminar focused on four areas: international trade facilitation; financial technology innovation; cross-border e-commerce; and culture-related trade involving digital technology. Entrepreneurs and scholars from both China and Brazil – respectively expert in finance, trade, e-commerce and culture – were invited to carry out in-depth discussions on the topic of “Strengthening the innovation in trade in services, deepening the cooperation through Forum Macao”. Mr Rodrigo Brum, Deputy Secretary-General of the Permanent Secretariat of Forum Macao, hosted a session on innovation in the technology of banking systems, briefing the participants on the basics of Forum Macao and the platform role of Macao. The participants all expressed hope for, and excitement about, the future of cooperation between China and Brazil.

During the seminar, the following pairs of organisations signed a memorandum of cooperation:the Dom Cabral Foundation Business School and the Chinese Research Institute of Trade in Services; Minas Gerais State University and the Beijing International Studies University; and Botafogo de Futebol e Regatas and a Brazilian culture and science innovation firm.