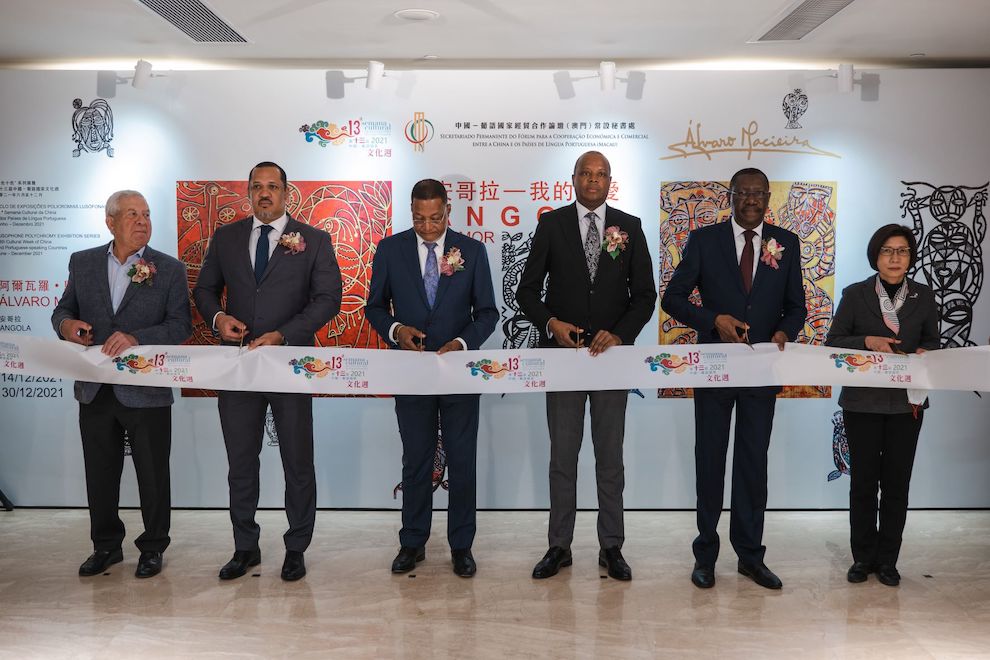 The inauguration ceremony for the “Angola – My Love” exhibition, which features work by Angolan artist Mr Álvaro Macieira, was held at the China-Portuguese-speaking Countries Commercial and Trade Service Platform Complex, on December 14 (Tuesday), at 6.30pm. The event was organised by the Permanent Secretariat of Forum Macao, under the “Lusophone Polychromes” exhibition series, part of the 13th Cultural Week of China and Portuguese-speaking Countries.

In a speech during the ceremony, Mr Espírito Santo praised Mr Macieira as a renowned artist in Angola, highlighting the fact that Mr Macieira was also a writer, a former journalist, an amateur ethnographer and with interests in mythology. Mr Macieira has travelled the entire country and is familiar with every myth and legend in Angola, which he transfers to his works with fascinating strokes that recount the diversified culture of Angola.

Mr Espírito Santo thanked all collaborators and units of the Permanent Secretariat of Forum Macao, the countries’ representatives, and all participating artists for the nine exhibitions that were held under the “Lusophone Polychromes” theme, despite the challenges brought about by the COVID-19 pandemic. He singled out Ms Lina Ramada, curator of the exhibition series, for her excellent work and great support to the initiative.

Mr Espírito Santo said additionally that he hoped all parties would continue to support the deepening of cooperation between China and Portuguese-speaking Countries, in order to enhance Macao’s platform role.

The Consul-General of Angola, Mr Galiano, said in his speech that contemporary art in Angola was flourishing, which has contributed greatly to the harmonious development of arts. Such efforts have been deepened by the establishment of a National Union of Plastic Artists (UNAP), an institution that has pushed forward the development of contemporary arts in Angola. The participation of Angolan artists in exhibitions in Angola and all over the world brings pride to the country, he added.

Artist Mr Macieira was born in the northern Angolan province of Uíge. He is also a writer, a former journalist and cultural consultant. He dedicated years to the research of Angolan culture. In 2002, he won the EnsArte prize in the category of painting, the highest award in plastic arts in Angola, and also the “Best Painter of the Year” prize, sponsored by the Tropical Magazine and by the Public Television of Angola.

In his 20 years as an artist, Mr Macieira has held 40 individual exhibitions and participated in more than 40 joint exhibitions around the world. He was even invited to design the emblem and flag for the National Assembly of Angola, as well as commemorative stamps themed “Peace in Angola” and “Africa Day”. The works of Mr Macieira are popular and are collected by private and public galleries in Angola and elsewhere.

The “Angola – My Love” exhibition aims to pay tribute to China and Angola via Macao’s role as a platform for cooperation, highlighting diplomatic relations and economic and trade cooperation between the two countries. It also seeks to boost cultural exchanges among people, especially with Macao residents.

Mr Macieira depicts his gratitude and passion for Angola in his works, praising the diversification and richness of African cultures. His works fully demonstrate the richness, uniqueness, joy and beauty of contemporary aesthetics, demonstrating his artistic path throughout the years.

Exhibition period: From December 14 to December 30, Tuesday to Sunday, from 11am to 7pm; closed on Monday. Free admission.

The Angola-Macau Association is holding three workshops in tandem with the exhibition. Artists will teach some art crafts, including how to make traditional toys, Samakaka dolls and masks with painting and collage decorations. The goal is to let participants experience the unique traditional culture of Angola.

All are welcome to enjoy the art exhibition. Visitors must comply with relevant public health guidelines, including the need to wear a protective facemask, to undergo a body-temperature check, and to present a valid “Macao Health Code”. To learn more about the 13th Cultural Week of China and Portuguese-speaking Countries, please visit the website https://semanacultural.forumchinaplp.org.mo/.