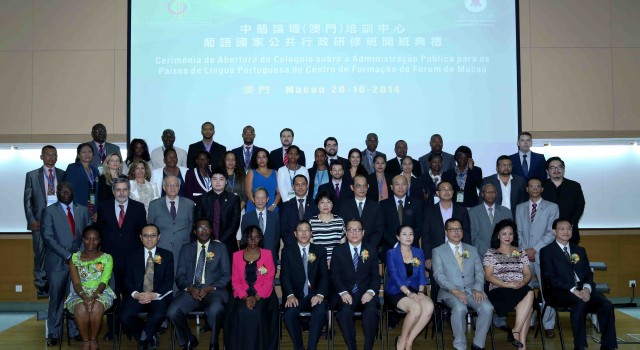 The opening ceremony of the “Seminar on Public Administration for Portuguese-speaking Countries” will take place on October 20, at 11 am, at the Mr. and Mrs. Lau Chor Tak Lecture Theatre in the new campus of the University of Macau. The seminar is organised by the Training Centre of the Forum for Economic and Trade Co-operation between China and Portuguese-speaking Countries (Macao), also known as Forum Macao.

The seminar sessions will take place in Macao and in Guangzhou, capital city of Guangdong Province, between October 13 and October 26. A total of 27 representatives from public services and professionals in this field from Angola, Brazil, Cape Verde, Guinea-Bissau, Mozambique, Portugal and Timor-Leste have enrolled for the seminar sessions. Participants will attend several thematic lectures and will also have the opportunity to make field trips in Macao and Guangzhou.

Experts from the University of Macau, representatives from Forum Macao and several experts in the field of public administration will be responsible for thematic lectures, including “Human Resources Management”; “Role of Macao as a Platform between China and Portuguese-speaking Countries”; “Labour Disputes and Collective Bargaining”; “Development of the Macao Government Electronic Platform”; and “Characteristics and Organisational Structure of Public Administration in Macao”, among other topics.

The participants will visit some public service departments of the Macao Government, including the Public Administration and Civil Service Bureau and the Labour Affairs Bureau, where they will have the opportunity to exchange opinions with local professionals.

During the stay in Guangzhou, participants attended a symposium at the 116th China Import and Export Fair (Canton Fair), visited several administrative offices such as the Office of the Government Affairs of Panyu District and the Directorate of Human Resources Services. They also attended a lecture from Prof. Yang Aiping, of the South Normal University of China, on “Management and Budget of Public Services in China”; and one from Prof. Chen Ruilian of Zhongshan University on “Administrative Reform in Guangdong Province”.

Participants will also attend lectures on the reform of the public administration system of Macao, communication between government and society, the relationship between government and market, the techniques of collective bargaining, resolution of labour disputes, as well as management of the electronic Government in Macao.

The lecturers will examine and assess the management system of the public administration of Macao from different points of view. The thematic lectures will be given on the basis of an interactive teaching model with theoretical support, using concrete cases for their analysis. That will consolidate the exchanges and co-operation between the Mainland, Macao and Portuguese-speaking Countries through an exchange of views with speakers, public services and other institutions, showing also the advantages of Macao in having two official languages, Chinese and Portuguese.

This seminar aims to introduce the current situation of public administration in Macao and Mainland China to attendees coming from Portuguese-speaking Countries, through visits and exchanges. It will also help to strengthen the exchanges between public administrations in Portuguese-speaking Countries and Macao and Mainland China, raising the general level of knowledge. The theme of the seminar provides a platform for opportunities for co-operation in other areas. For example, it aims to help implement co-operation and development in the areas of education and human resources via Forum Macao, thus deepening the role of Macao as a platform between China and Portuguese-speaking countries.