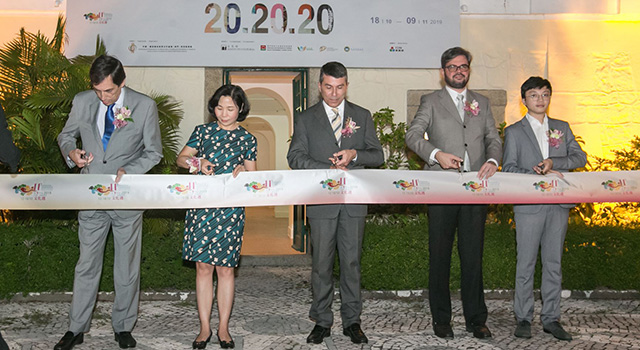 The opening ceremony for the “20.20.20” art exhibition was held at 6pm on October 18 at the Gallery in the Official Residence of the Portuguese Consul-General in Macao and Hong Kong. The exhibition features artwork by 20 Macao artists and has been organised by the Permanent Secretariat of Forum Macao. The showcase is part of the activity programme of the 11th Cultural Week of China and Portuguese-speaking Countries.

Secretary-General Ms Xu said in a speech at the event that the “20.20.20” exhibition was of particular significance, as it was the final activity included in the 11th Cultural Week of China and Portuguese-speaking Countries.

The exhibition features artwork by 20 young Macao artists, exploring Macao’s uniqueness as a meeting place for Eastern and Western cultures. The exhibited pieces make use of various artistic styles and concepts, and contribute to the festive atmosphere in the lead up to the 20th anniversary of the establishment of the Macao SAR.

All are welcome to visit the exhibition. It is open daily until November 9, from 11am to 5pm.