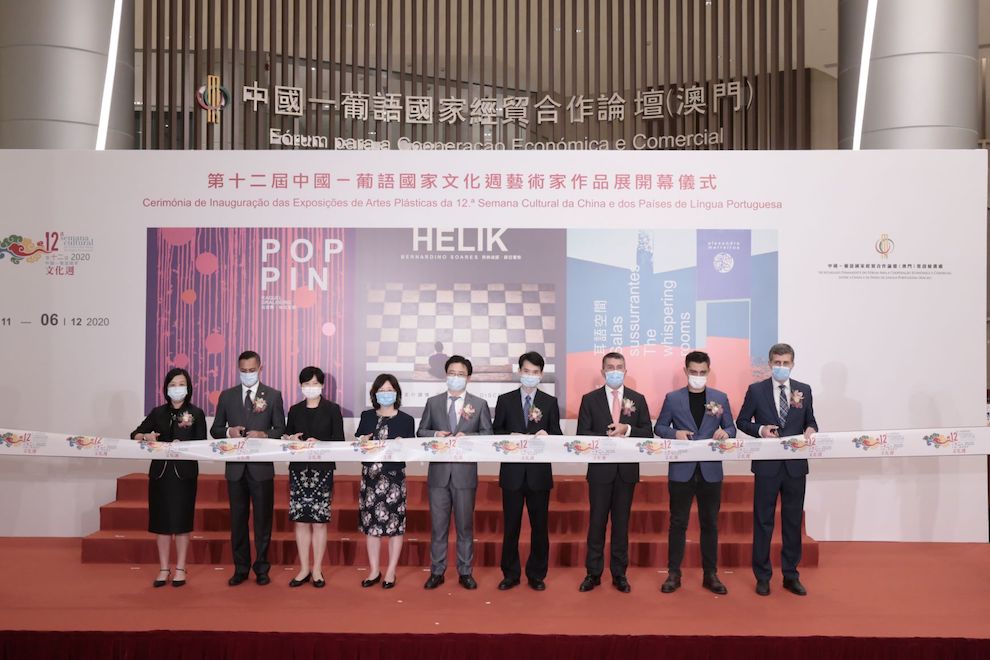 Due to the pandemic, the current edition of the Cultural Week adopted a new arrangement, with activities held online and offline.

Forum Macao Deputy Secretary-General Mr Ding said in his speech at the opening ceremony that the art exhibitions – held offline – had significantly enriched the content of the 12th Cultural Week. Although the health crisis had prevented the respective artists from Portugal and Timor-Leste from attending the ceremony, it had not inhibited the cultural exchanges between peoples.

Videos of the artists’ work had been uploaded to the thematic website of the 12th Cultural Week of China and Portuguese-speaking Countries, and much of their iconic work was being shown in Macao for the exhibitions. Their pieces, and those also of the Macao artist, demonstrate the diversity and development of the contemporary arts in Portuguese-speaking Countries and in Macao.

Mr Ding said Forum Macao would continue to make good use of Macao’s advantages, in order to help expand cooperation with the Portuguese-speaking Countries with the aim of achieving mutual understanding between cultures, civilisations and peoples.

The work of Ms Gralheiro reflects her engagement with – and exploration of – the female form in the world of the imagination. In her exhibition “POP-PIN”, the artist uses a mixture of figurative and realistic art styles that sometimes recall pop art, to express positive energy through fluid relationships between the images. Her work also expresses good luck, peace, joy, and the strength of pure colours, feelings she wishes to convey to the general public.

Bernardino Soares’ photographs seek to inspire the audience. His exhibition, titled “HELIK” (Discreet), presents people’s physical bodies and facial expressions as if marked by the passage of time. It also showcases the unique cultural scene of Timor-Leste, via the depiction of the extraordinary cultural blending that has linked the proud Mambae people from the central region of the country, to the intrepid Makassae people that came from the Melanesian region to the island of Lorosae.

Mr Marreiros is a young architect, designer and artist working within the cultural crossroads that is Macao. His artwork exhibition, titled “The whispering rooms”, explores cultural integration and diverse elements. Those themes permeate the detailed, rich and rigorous designs in his work, which also serves to perpetuate and advance the artistic contribution of Macanese people within the city.

For more information, please visit the thematic page of the 12th Cultural Week of China and Portuguese-speaking Countries: semanacultural.forumchinaplp.org.mo; or contact 8791 3390 or 8791 3316. Those wanting to book a guided tour, can also reach the organiser via either of the mentioned phone numbers.