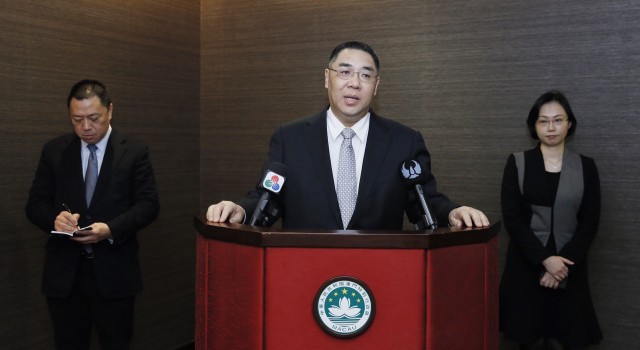 Strengthening co-operation with regions in the Pan-Pearl River Delta is the most important feature in the Macao Special Administrative Government’s proposals for the country’s 13th five-year plan, said today (January 27) Chief Executive, Mr Chui Sai On.

In the social and economic development blueprint for 2016-2020, the Government would press ahead on the collaboration projects with Nansha in Guangzhou and Hengqin in Zhuhai, he said.

The Government was awaiting approval from the Central Government for further moves in the establishment of the Guangdong-Macao co-operation display zone, together with the Zhongshan government.

Mr Chui, who is leading an official delegation on a four-day visit to Beijing, disclosed this today in a press briefing after visiting the National Development and Reform Commission, the Ministry of Commerce and the State Administration of the Traditional Chinese Medicine, and the Taiwan Affairs Office of the State Council.

Earlier today, Mr Chui met with the Vice Minister of the National Development and Reform Commission, Mr Xu Xianping, and discussed issues on the development of the free trade zone in Guangdong.

They also shared views on how to make best use of the country’s initiatives, such as the Closer Economic Partnership Arrangement (CEPA) and its supplementary agreements, trade liberalisation and structural reforms, to further expand business network with Macao’s small- and medium-sized enterprises.

In the next five years, the Government would step up efforts to turn Macao into a world centre for tourism and leisure and a commercial and trade co-operation service platform between China and the Portuguese-speaking countries, to bring in more innovative ideas to the projects.

Mr Chui said he would meet with the officials of the Guangdong government soon to discuss issues on developing Hengqin and Nansha and the country’s development direction.

In a meeting with Mr Chui yesterday, officials of the Ministry of Commerce said Macao could strengthen its role as a platform between China and the Portuguese-speaking countries by not only fostering co-operations in commercial and trade services but also in the exchanges of cultural affairs.

Later in the day, the delegation met with officials of the State Administration of Traditional Chinese Medicine.

Mr Chui said he was pleased to see Central Government giving full support in Macao’s efforts in diversifying the economy, such as offering professional education for the training of more personnel to meet the development needs in the emerging traditional Chinese medicine industry.

When asked, Mr Chui said the Government had been studying its capacity to accommodate more visitors, adding it would strengthen the management of cross-boundary checkpoints, increase the number of hotel rooms, and enhance the transport networks and measures of crowd control on holidays.