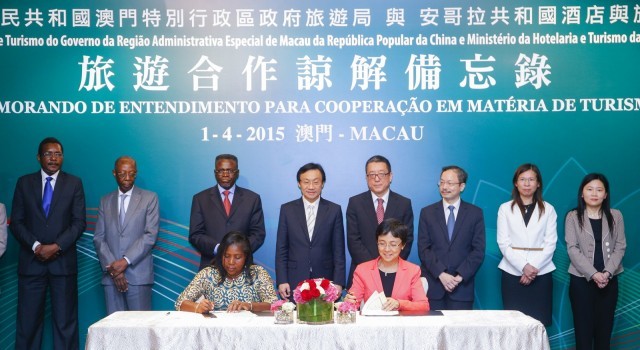 Macau Government Tourist Office (MGTO) signed a Memorandum of Understanding (MOU) for cooperation in tourism with the Office of International Exchange, Ministry of Hotels and Tourism of the Republic of Angola (‘Angola’) today (1 April) to strengthen their collaborative relation for mutual benefit.

Director of MGTO, Maria Helena de Senna Fernandes and Director of the Office of International Exchange, Ministry of Hotels and Tourism of the Republic of Angola, Rosa António Gomes Cruz, signed the MOU for cooperation in tourism.

Considering the friendly and collaborative relation between Macau and Angola, both parties agreed to sign the MOU in order to begin and promote their multifaceted cooperation in tourism.

For the main purpose of training talents in the tourism industry while considering its significance to the economy of Macau and Angola, the memorandum aims at eight objectives as follows: exchange information on formulation, definition and implementation of policies in the tourism sector; share experience regarding planning, management and certification system of tourism activities; develop collaborative relations and partnership between small and medium-sized tourism enterprises of Macau and Angola; assist the tourism sector, travel agencies and hotels in organizing promotional activities; exchange information on tourism market trends as well as other technical and statistical data; assist in establishing an incentive system for promotion of the tourism industry; tourism promotion primarily through studies on the tourism image of both destinations, promotional activities, participation in travel fairs and business forums as well as other related activities; training and skill development of technical talents in the above fields.

Macau and Angola collaborate with each other through a variety of ways including familiarization visits, information and document exchange, technical assistance, offering suggestions and training.

Macau and Angola signed the MOU for cooperation in tourism while the 10th General Meeting of the Permanent Secretariat of the Forum for Economic and Trade Co-operation between China and Portuguese-Speaking Countries (Macau) took place in Macau.

MGTO also signed Memoranda of Understanding for cooperation in tourism with Cape Verde, Guinea-Bissau and Mozambique in 2010, and with East Timor in 2013. In order to reinforce mutual learning and exchange, hence contributing to training tourism professionals for these Portuguese-speaking countries, MGTO already welcomed a total of 57 tourism government trainees from these countries between 2012 and 2014.