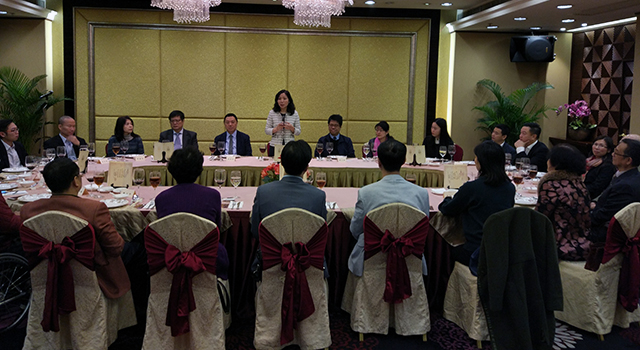 The Permanent Secretariat of the Forum for Economic and Trade Co-operation between China and Portuguese-speaking Countries (Macao), also known as Forum Macao, hosted a media luncheon at the Plaza Restaurant on January 18 and another on January 19. Guests over the two days included representatives from local Chinese-, Portuguese- and English-language media; and representatives from the Central People’s Government in the Macao Special Administrative Region (SAR). Special guests – attending both luncheons – were the Macao SAR Government’s Secretary for Economy and Finance, Mr Leong Vai Tac; the Secretary-General of the Permanent Secretariat of Forum Macao, Ms Xu Yingzhen; and Deputy Secretaries-General of Forum Macao, Mr Ding Tian, Mr Vicente Manuel and Ms Echo Chan.

During the respective luncheons, Ms Xu expressed her gratitude to the media for their support of Forum Macao’s work. She said a number of initiatives by Forum Macao were planned for 2017 in order to implement the 18 measures announced by the Central People’s Government during last year’s Ministerial Conference of Forum Macao, as well as to implement the Strategic Plan for Economic and Trade Co-operation (2017-2019), signed during that event.

Ms Xu said the work of the Permanent Secretariat of Forum Macao would focus on promoting co-operation in: production capacity; trade and investment; human resources; and cultural exchanges. Ms Xu added she hoped to have support from the local media in pushing ahead with those tasks. She stated the Permanent Secretariat of Forum Macao would continue to support the Macao SAR Government in the important mission of positioning Macao as a Commercial and Trade Co-operation Service Platform between China and Portuguese-speaking Countries. She noted this was one of the reasons for the creation of Forum Macao.

During each luncheon, Ms Xu introduced to the local media the two newest members of the Permanent Secretariat of Forum Macao, who came into office earlier this year: Deputy Secretary-General appointed by the Ministry of Commerce of the People’s Republic of China, Mr Ding Tian; and Deputy Secretary-General appointed by the Macao SAR Government, Ms Echo Chan.