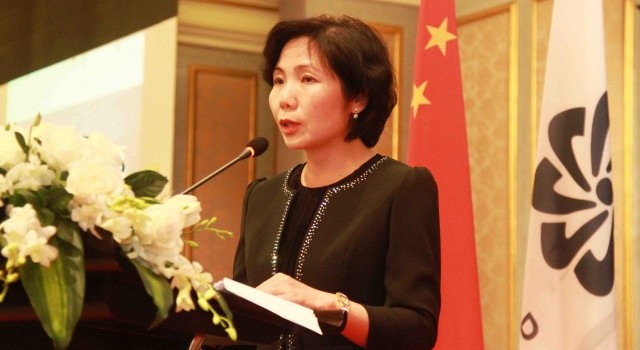 There were nearly 500 attendees, including the respective ambassadors to China of the Portuguese-speaking Countries, diplomats and Chinese government delegates, as well as entrepreneurs, scholars, teachers and students from Mainland China and Macao.

Cabo Verde’s Ambassador to China, MsTânia Romualdo, and Forum Macao’s Ms Xu respectively delivered speeches at the event. Ms Xu gave an introduction to the work of Forum Macao in actively promoting cultural exchanges amongst its member countries during the organisation’s 15 years of existence.

The signing of the Strategic Plan for Economic and Trade Co-operation during the 5th Ministerial Conference of the Forum for Economic and Trade Co-operation between China and Portuguese-speaking Countries is another example of the efforts of Forum Macao in terms of promoting cultural exchanges amongst the member countries. The strategic plan states that the member countries of Forum Macao shall reinforce cultural exchanges using Macao as the platform. Such a platform is also vital to enhancing trade cooperation amongst the different places.

Currently, Macau is advancing its work to build the Centre for Cultural Exchanges between China and Portuguese-speaking Countries. This project is expected to further facilitate cultural exchanges between the various places.

The event included performances by groups from Angola, Timor-Leste and Cabo Verde as well as dances by students on Portuguese language courses at higher education institutions in mainland China. The event successfully enhanced cultural exchanges between China and Portuguese-speaking Countries.