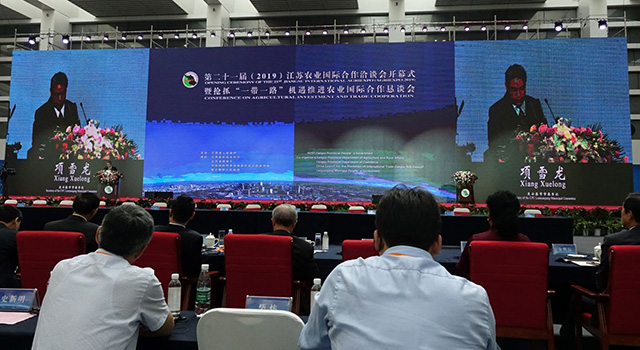 A delegation of the Permanent Secretariat of Forum Macao – led by Deputy Secretary-General Mr Ding Tian – visited the Lianyungang municipality in Jiangsu Province in Mainland China, from September 19 to 21. Lianyungang is a popular tourism destination on the East China Sea coast.

The visit was immediately after the delegation’s visit to Huai’an, also in Jiangsu Province.

The visit to Lianyungang aimed to further the implementation of the Strategic Plan for Economic and Trade Co-operation approved during the 5th Ministerial Conference of Forum Macao. Other objectives of the Lianyungang visit included seizing opportunities created by the “Belt and Road” initiative; and fostering economic and trade cooperation between provinces and municipalities from Mainland China and the Portuguese-speaking Countries.

The Forum Macao delegation attended while in Lianyungang the opening ceremony for the 21st Jiangsu Province International Agriculture Cooperation Meeting, and the International Agriculture Cooperation Promotion Meeting. The latter event was themed “Taking advantage of the ‘Belt and Road’ Initiative Opportunities”. In addition, the Forum Macao party attended an investment presentation session on modern agricultural practice in Lianyungang. It also held a promotional event on trade and economic matters, called the “Meeting on Production Capacity Cooperation between Jiangsu, Macao and Portuguese-speaking Countries”.

Participants in the event exchanged views on how to make use of Forum Macao’s role as a multilateral cooperation mechanism and get the most out of Macao’s role as a cooperation platform. That was not only in order to support companies seeking to invest abroad but also to attract additional inward investment, and to promote agricultural cooperation between Jiangsu, Macao and Portuguese-speaking Countries. Participants in the Jiangsu, Macao and Portuguese-speaking Countries Agricultural Cooperation Meeting also carried out exchanges on: trade in agricultural products; agricultural technology innovation; and professional training in the field of agriculture.