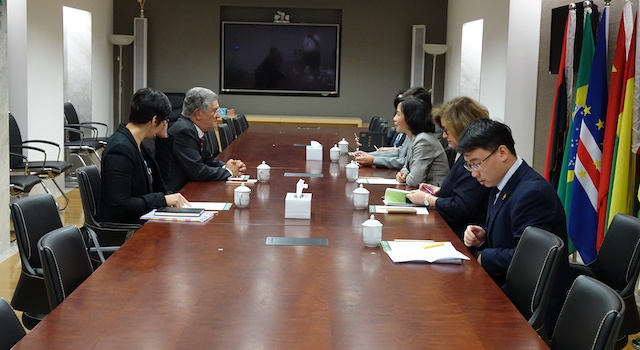 Secretary-General Ms Xu highlighted Forum Macao’s commitment to making the most of Macao’s advantages as a cooperation platform, in order to promote economic and trade collaboration between China and Portuguese-speaking Countries. She added that the Permanent Secretariat of Forum Macao planned further to strengthen communication with AICEP in order to advance Macao’s platform role and explore collaboration opportunities in: economic and trade matters; human resources; traditional medicine; culture; and cooperation between provinces and municipalities of the participating countries in Forum Macao. That was with an aim to improve support provided to companies, and to strengthen business cooperation between China and Portugal. Other objectives of Forum Macao-AICEP collaboration included: to enable more Portuguese companies to learn about the work done by Forum Macao; and to help more companies from provinces and municipalities in Mainland China to improve their respective knowledge of the Portuguese-speaking Countries.

Mr Silva gave his thanks for the warm welcome from officials of the Permanent Secretariat of Forum Macao. He said AICEP had been actively promoting Portugal’s involvement in the Community of Portuguese-Language Countries, an international organisation. He added that Portugal had been developing several human resource training projects respectively in Angola, Cabo Verde, and São Tomé and Príncipe. Portugal had also made available a number of short-term internship programmes to young people from various countries, including China. Mr Silva stressed that AICEP would continue systematically to support small and medium-sized enterprises (SMEs) from Portugal in gaining access to the Macao and Mainland China markets.

The participation of Portuguese SMEs in this year’s edition of the Macao International Trade and Investment Fair (MIF) was yet another contribution to the process of enabling Portuguese entrepreneurs to learn more about the markets in Macao and Mainland China, Mr Silva said.