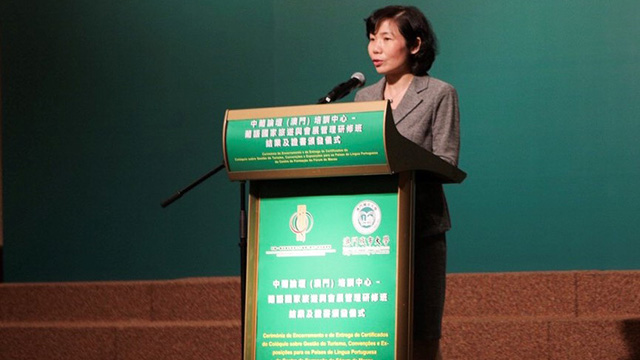 The closing ceremony and certificate presentation ceremony of the “Workshop on Tourism and the MICE Industry for Portuguese-speaking Countries” programme, organised by Forum Macao’s Training Centre, in collaboration with the City University of Macau, were held in the Grand Ballroom at MGM Macau on May 6.

The workshop programme, held from April 23 to May 6, was Forum Macao Training Centre’s first such activity of 2019. A total of 31 public officials, representatives and managers from various areas from the eight Portuguese-speaking Countries, namely Angola, Brazil, Cabo Verde, Guinea-Bissau, Mozambique, Portugal, São Tomé and Príncipe, and Timor-Leste, signed up to receive training in Macao.

During the workshop programme, lectures and other activities were held, highlighting such topics as the “One Centre, One Platform” strategy for Macao; and the scope for greater innovation in terms of cooperation between the tourism and MICE (meetings, incentives, conferences and exhibitions) sectors of Mainland China, Macao and Portuguese-speaking Countries. Also covered were: tourism development opportunities in the Guangdong-Hong Kong-Macao Greater Bay Area and worldwide; and the development of the “One Belt, One Road” initiative.

The workshop programme included visits to Macao institutions involved in the event, namely the Permanent Secretariat of Forum Macao, the Macao Government Tourism Office, and the Macao Trade and Investment Promotion Institute (IPIM). Programme participants also visited the Portuguese-speaking Countries’ Food Products Exhibition Centre, located in Tap Seac Square, as well as tourism and MICE facilities, and some of Macao’s World Heritage sites. They had the opportunity additionally to take part in the main activities of the 7th Macao International Travel (Industry) Expo (MITE) and the Presentation on Tourism Products from the Portuguese-speaking Countries. In the latter scenario, representatives from each participating country promoted and raised awareness on: that nation’s tourism-related resources and products; the stage of development for the local tourism industry; and the business and investment environment of their countries.

Speeches were given at the closing ceremony by Secretary-General Ms Xu; the Rector of the City University of Macau, Prof. Zhang; and Ms Catarina Raquel Mendonça Taborda, representing workshop programme participants.

In her speech, Secretary-General Ms Xu stressed that one of Forum Macao’s key tasks – as well as one of the main goals of the workshop programme – was promotion of exchanges and cooperation in tourism and MICE business. She added that during the workshop programme several issues were discussed. Ms Xu also highlighted the outstanding contributions made at the 7th Macao International Travel (Industry) Expo by representatives of countries participating in the workshop.

Macau, with its multiculturalism and linguistic diversity, had unique advantages that would assist the city in achieving its goal of becoming a world centre of tourism and leisure, said Ms Xu. At the end of her speech, the Secretary-General called for continued support from the workshop programme participants in developing Forum Macao; and regarding cooperation between China and Portuguese-speaking Countries in the fields of tourism and MICE via Macao’s platform function. This would help to promote jointly the economic growth of China and Portuguese-speaking Countries.