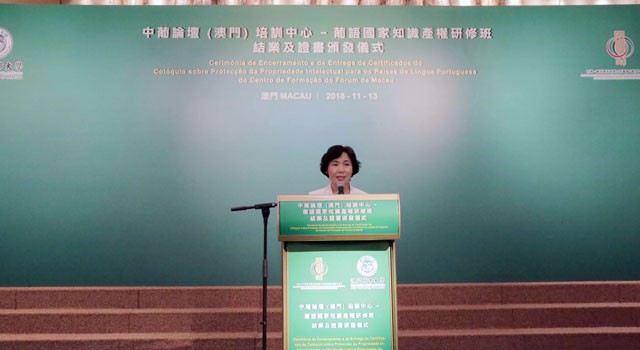 The closing ceremony and certificate presentation ceremony of the “Seminar on Intellectual Property Protection for Participants from Portuguese-speaking Countries”, an event organised by Forum Macao’s Training Centre, in collaboration with the University of Macau, was held in the Grand Ballroom at MGM Macau on November 13.

Guests taking part in the seminar’s concluding ceremonies included: the Deputy Director-General of the Economic Affairs Department of the Liaison Office of the Central People’s Government in the Macao SAR, Mr Zhang Jianhua; the Consul-General of Angola in the Macao SAR, Ms Sofia Pegado da Silva; the Consul-General of Mozambique in the Macao SAR, Mr Rafael Custódio Marques; the Consul General of Portugal for Macao and Hong Kong, Mr Paulo Cunha Alves; and the Honorary Consul General of Cabo Verde in Macau, Mr David Chow. Speeches were given at the concluding ceremonies by: the Delegates of Portuguese-speaking Countries to Forum Macao; its Secretary General, Ms Xu Yingzhen; City University of Macau Vice-Rector, Professor Kong Fan Qing; and Mr Vinicius Bogea Câmara, representing seminar participants.

Secretary-General Ms Xu said in her speech that, with economic development continually driven by innovation and creation, the protection and enforcement of intellectual property rights was becoming more and more important. This had made the topic an obvious choice for a seminar. The Secretary General said she hoped that the seminar activities had served to strengthen the exchange of ideas and cooperation in this area, helping the joint development of China and Portuguese-speaking Countries.

Participants also had the chance to attend the “1st Summit of the Knowledge and Innovation Transfer Network between China, Portuguese-speaking Countries, and Latin American Countries,” organised by the City University of Macau. In addition, they made a study visit to Hengqin International Intellectual Property Trading Centre Co Ltd, in Zhuhai, where they also took part in the “China-Latin America and the Caribbean International Exposition” (CLAC Expo). They also visited Guangzhou to participate in the “Canton Fair”.

Seminar attendees agreed that the Forum Macao event facilitated exchange of experiences regarding intellectual property rights covering Portuguese-speaking Countries, Mainland China and Macao. It also assisted participants in developing professional skills, and in strengthening their knowledge of Macao as a service platform for trade cooperation between China and the Portuguese-speaking Countries. Additionally, the seminar helped identify potential opportunities for cooperation and for boosting development of trade between the participating places and bodies.