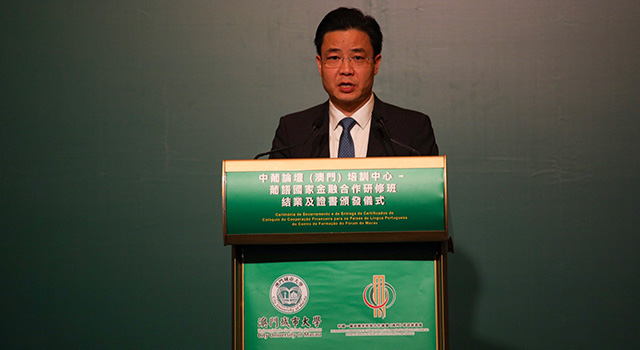 The closing ceremony of the Seminar on Finance Cooperation between China and the Portuguese-speaking Countries, an event organised by the Training Centre of Permanent Secretariat of Forum Macao and supported by the City University of Macau, was held on May 30 at the Grand Ballroom of MGM Macau.

This was the second training seminar held so far this year by the Training Centre of the Permanent Secretariat of Forum Macao. It took place between May 20 and June 1 in Hubei and Macao. A total of 26 officials, trade body representatives, and industry executives – all working in fields related to finance cooperation, and hailing from an aggregate of seven Portuguese-speaking Countries, namely Brazil, Cabo Verde, Guinea-Bissau, Mozambique, Portugal, São Tome and Principe, and Timor-Leste – took part in the seminar.

In the first part of the seminar, the participants visited Hubei Province for exchanges with local enterprises. Such exchanges included seminar participants attending two meetings held in the cities of Wuhan and Yichang and concerning industrial cooperation between China and Portuguese-speaking Countries.

In Macao, the seminar participants engaged in a series of activities, including talks discussing the “Belt and Road” initiative, financial cooperation between China and other countries, the banking and insurance policies of Macao, and the economic diversification of Macao.

Participants also visited the facilities respectively of the Permanent Secretariat of Forum Macao, the Monetary Authority of Macao, and the Macao Economic Bureau. They also took part in a number of the activities at the 10th International Infrastructure Investment and Construction Forum held in Macao, namely the parallel forum “Maximizing the Role of Finance in Promoting Practical Cooperation between China and Portuguese-Speaking Countries – Focusing on Project Investment and Financing, Sharing Successful Experience and Exploring Cooperation Mode.”

Mr. Ding said in his remarks that financial cooperation was a driving force for cooperation between China and Portuguese-speaking Countries, and an effective instrument for achieving mutual benefits. He added that the current seminar served as an exchange platform for participants to have further understanding about the development of international financial cooperation in Mainland China and Macao. Mr Ding said he hoped each participant – after returning to their respective home country – could continue to support the work of the Permanent Secretariat of Forum Macao, and actively study how to deepen financial cooperation between China and Portuguese-speaking Countries through the Macao platform, in order to achieve mutual development for all sides.