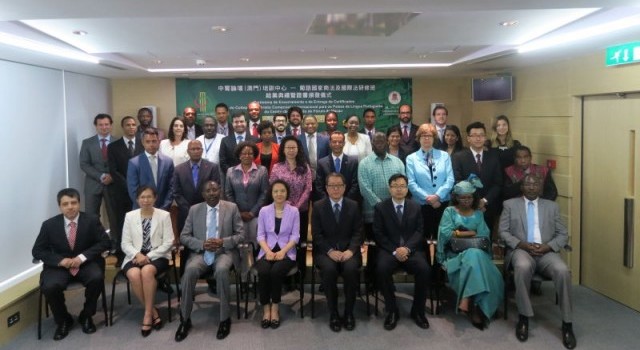 The Closing Ceremony of the “International Law and Trade Law Conference for Portuguese-speaking Countries” was held on July 6, at the Permanent Secretariat of the Forum for Economic and Trade Co-operation between China and Portuguese-speaking Countries (Macao), also known as Forum Macao. The Conference was hosted by the Training Centre of Forum Macao and conducted by the University of Macau at the Multifunctional Room of the Permanent Secretariat of Forum Macao.

The Conference provided a learning and exchange platform for participants, with a series of lectures organised on topics including ‘International Law in the Age of Globalisation’, ‘Business Theory’, and ‘Legal and Political-Administrative Structure of the Macao SAR’.

There were also visits to the Law Reform and International Law Bureau and to the Juridical and Judicial Training Centre, as well as to other agencies in Macao.

This was the third conference hosted in 2015 by the Training Centre of Forum Macao. About 22 professionals from six Portuguese-speaking Countries attended the Conference, namely from Brazil, Cape Verde, Guinea-Bissau, Mozambique, Portugal and East Timor.