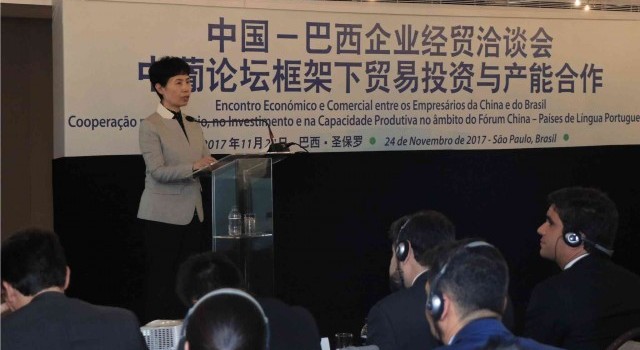 The “China-Brazil Economic and Trade Seminar: Cooperation on Trade, Investment and Production Capacity under the Framework of Forum Macao” was held in São Paulo on November 24. The seminar was organised by the Permanent Secretariat of the Forum for Economic and Trade Co-operation between China and Portuguese-speaking Countries (Macao) and the Macao Trade and Investment Promotion Institute (IPIM), with the support of the São Paulo Chamber of Commerce. The event was also supported by the Consulate-General of China in São Paulo.

Among the speakers at the seminar were China’s Vice-Minister of Commerce, Ms Gao Yan; Brazil’s Vice-Minister of Development, Industry and Foreign Trade, Mr Marcelo Maia; and the Chinese Consul-General in São Paulo, Ms Chen Peijie.

China and Brazil have had a long-standing history of trade and cultural exchanges, Ms Gao said in her speech. She additionally said she hoped that the Brazilian Government and companies could make full use of the advantages provided by Macao’s role as a platform, and to be able to benefit from the ongoing policy reform in Mainland China.

There is much room for cooperation in various domains for both government and companies from China and Brazil, Mr Maia said in his speech. He said he also expects more companies from both sides to boost trade cooperation using Macao as a platform.

Secretary-General of Forum Macao Ms Xu Yingzhen spoke of the vast demand for cooperation in trade and industrial capacity production between China and Brazil, the latter being the biggest Portuguese-speaking Country and one of the biggest economies in the world. She said she hoped that such cooperation could be further strengthened in the future.

About 160 representatives from companies of Mainland China, Brazil and Macao have been invited for a total of 26 business-matching sessions. The businesses involved included manufacturers of food products, medical products, construction materials and mining.

Three cooperation agreements were signed at the seminar, which included an agreement for setting up a communication mechanism between the trade chambers of Macao and Brazil. The other agreements recognised the Macao Government’s positioning in developing the “One Platform, Three Centres” policy, as well as the reinforcing of cooperation ties and information sharing between Macao and Brazil.