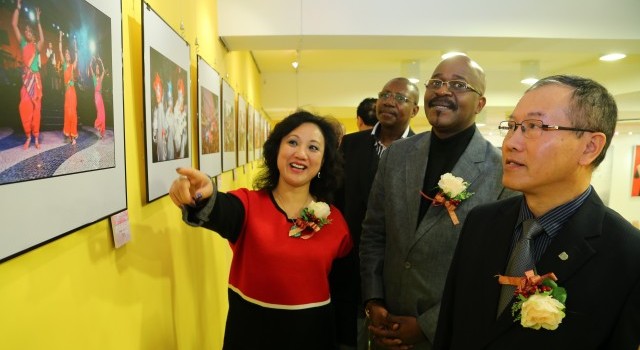 The Award Presentation Ceremony for the Photo Competition included in the 6th Cultural Week of China and Portuguese-speaking Countries took place on January 31, at 3pm. It was followed by the inauguration of an exhibition featuring the awarded entries and held at Cool Gallery, in the Weng Nin building, Pátio de S. Lázaro.

The competition was organised by the Permanent Secretariat of the Forum for Economic and Trade Co-operation between China and Portuguese-speaking Countries (Macao), also known as Forum Macao. The competition also received assistance from the Civic and Municipal Affairs Bureau and the Macau Government Tourist Office, and additionally gained the support of the Macao Digital Photography Association.

The Photo Competition Award Presentation and Photo Exhibition Opening Ceremony was officiated by: Forum Macao’s Deputy Secretary-General, Ms Rita Santos; the Director of the General Affairs Department of the Commissioner’s Office of the Ministry of Foreign Affairs of the People’s Republic of China in Macau, Mr Li Zhenhua; the Consul General of Mozambique in Macau, Mr Rafael Custódio Marques; the Deputy Consul General of Angola in Macau, Mr Belmiro Manuel Peio; the Representative of the Consul General of Portugal in Macau, Mr Laurentino Neves; the Honorary Consul General of Cape Verde in Macau, Mr David Chow; the Deputy Director of the Macau Government Tourist Office, Mr Cheng Wai Tong; the Council of the Portuguese Communities’ Advisor for the Macau/Hong Kong/China/Japan/Thailand Section, Mr José Pereira Coutinho; the Head of the Division of Cultural Activities of the Civic and Municipal Affairs Bureau, U Weng Hong; the Representative of East Timor in Forum Macao, Mr Danilo Henriques; the Chairman of the Macao Digital Photography Association, Mr Yen Kuacfu; and the Creative Director of Cool Gallery, Mr Carlos Kuan.

The Photo Competition is one of the most important activities included in the annual Cultural Week of China and Portuguese-speaking Countries, helping to promote cultural interchange between both sides, as stated in the Strategic Plan for Economic and Trade Co-Operation of Forum Macao. The contest also aims to stimulate creativity and multiculturalism among Macau residents and tourists.

A total of 36 amateur photographers took part in the competition and a total of 295 works were submitted. The jury gave the first prize to Chin Kuong Heng. Sérgio Chan and Chan Hiu Kuong were first and second runner-up, respectively. Chin Kuong Heng also won the award for ‘Best Picture’. In addition, the jury gave 10 honourable mentions to other entrants.

The Photo Exhibition at Cool Gallery features the prize-winning works and other selected entries, and has a total of 50 pictures. It runs every day until February 28 (except Wednesdays), from 10am to 6pm. All are welcome.