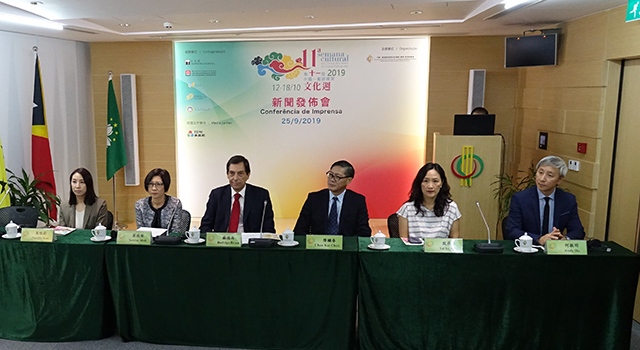 The 11th Cultural Week of China and Portuguese-speaking Countries will be held from October 12 to 18. It is organised by the Permanent Secretariat of the Forum for Economic and Trade Co-operation between China and Portuguese-speaking Countries (Macao). The event will feature: music and dance performances; visual arts exhibitions; a showcase of theatre; a handicraft fair; and a food festival.

The Permanent Secretariat of Forum Macao held on September 25 a press conference about the 11th Cultural Week. The briefing was attended by Deputy Secretary-General Mr Rodrigo Brum and by the Coordinator of the Support Office, Ms Mok Iun Lei.

The theme of the 11th edition of the Cultural Week will continue to be – as in recent years – “Cultural Belt and Road”. The event will make use of Macao’s bridging role between China and the Portuguese-speaking Countries to promote cultural exchanges and deepen people-to-people friendship ties, thus contributing to economic and trade cooperation between both sides. The event will also look to celebrate the 20th anniversary of Macao’s return to the motherland and the 40th anniversary of the reestablishment of diplomatic ties between China and Portugal.