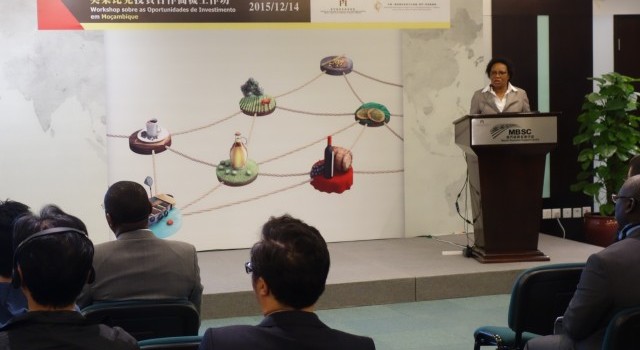 A Workshop on business opportunities in Mozambique took place on December 14, at Macao Trade and Investment Promotion Institute’s (IPIM) Macao Business Support Centre. IPIM and the Permanent Secretariat of the Forum for Economic and Trade Co-operation between China and Portuguese-speaking Countries (Macao) – also known as Forum Macao – jointly organised the event.

The aim was to enhance the services platform for economic and trade co-operation between China and Portuguese-speaking Countries, as well as to strengthen regional economic co-operation and to help small- and medium-sized enterprises (SME) from Macao and neighbouring regions to improve their knowledge on the Portuguese-speaking Countries’ markets.

More than 40 representatives from several economic and trade entities, as well as businesspeople and investors from different fields – including trade, retail, e-commerce, translation, banking, engineering and logistics – took part in the event.

During the Workshop, IPIM’s Executive Director, Ms Glória Batalha Ung, noted that in the first 10 months of 2015 bilateral trade between China and Mozambique hit almost US$2 billion. It is expected that the “One Belt, One Road” initiative – promoted by China – will help boost co-operation between China and Mozambique, namely in infrastructure development, engineering, construction and tourism, she added.

Macao plays an important role in the “One Belt, One Road” strategy, namely as a service platform for economic and trade co-operation between China and Portuguese-speaking Countries.

The Workshop allowed participants to learn more about the business environment and investment opportunities in Mozambique. At the same time, it contributed to promote economic and trade co-operation between Macao and that Portuguese-speaking Country.

Ms Francisca Torcida Reino, Mozambique’s Representative to the Permanent Secretariat of Forum Macao, was a guest speaker at the Workshop. She introduced the investment environment and opportunities offered in Mozambique’s market. She also presented the policies and support schemes offered to foreign investors by the country’s government.

Mr Afonso Chan, Vice-President of Charlestrong Engineering Technology and Consulting (Macau) Limited, was also invited to share his experience in fields related to infrastructure and development projects in Mozambique.

The Workshop also included a showcase of typical products from Mozambique. It was an opportunity for participants in the Workshop to learn more about the country’s products and to identify potential business opportunities, aiming at promoting economic and trade development in both Macao and Mozambique.