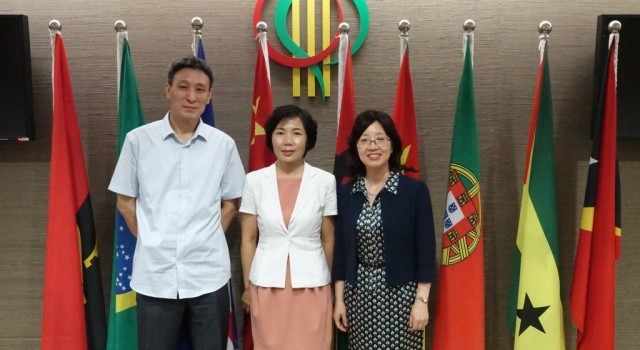 The new Director-General of the Commercial Delegation of the Department of Economic Affairs of the Liaison Office of the Central Government in the Macao Special Administrative Region, Ms Li Huaying, as well as the Principal Representative in Macao of the China Council for the Promotion of International Trade, Mr Cui Wenlong, visited on October 5 the Permanent Secretariat of the Forum for Economic and Trade Co-operation between China and Portuguese-speaking Countries (Macao), also known as Forum Macao. The visiting officials met with Secretary-General Ms Xu Yingzhen, exchanging views on cooperation matters.

Ms Xu welcomed the officials and congratulated them on their respective new roles. She also provided them with a brief introduction about Forum Macao’s work.

The Secretary-General said that over the years the Commercial Delegation of the Liaison Office had provided support to a number of activities organised by the Permanent Secretariat of Forum Macao. Ms Xu said she hoped to continue to strengthen the cooperation ties with the Commercial Delegation of the Liaison Office under the leadership of Ms Li, in order to boost support for the economic and trade exchanges between China and Portuguese-speaking Countries, and jointly to provide assistance to the Macao SAR Government in its endeavour to transform the city into a Commercial and Trade Cooperation Service Platform between China and Portuguese-speaking Countries.

Ms Xu said additionally that she hoped to develop closer ties with the Macao Delegation of the China Council for the Promotion of International Trade, collaborating in organising more exchanges between enterprises from Mainland China and the Portuguese-speaking Countries, thus contributing to the economic development of both sides.