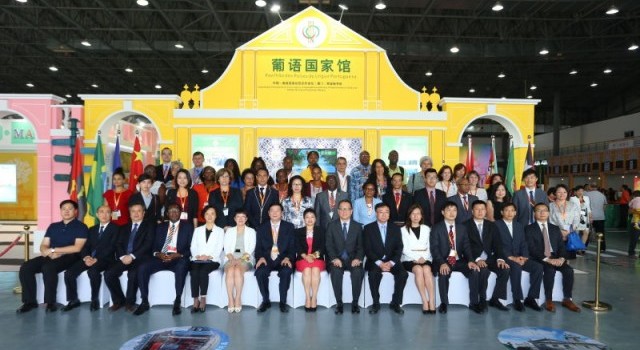 A Delegation of the Permanent Secretariat of the Forum for Economic and Trade Co-operation between China and Portuguese-speaking Countries (Macao) – together with a Delegation from the Macao SAR Government – this month visited Nanchang, in China’s Jiangxi Province. It was there to take part in the activities of ‘Macao Week’ in Nanchang, as well as to participate in the ‘Dynamic Macao Business and Trade Fair’, also held in Nanchang.

On the morning of September 18, the opening ceremony of ‘Macao Week’ and of the ‘Dynamic Macao Business and Trade Fair’ in Nanchang, was held at the Nanchang International Exhibition Centre. The Deputy Director of Macao Economic Services, Ms Chan Tze Wai, and the Deputy Head of the Department of Commerce of Jiangxi Province, Mr Li Wenyao, visited the Portuguese-speaking Countries Pavilion presented by the Permanent Secretariat of Forum Macao.

On the afternoon of September 18, the Seminar was successfully held at the Wanda Realm Hotel. During the event, Jiangxi business people from the fields of science, technology, electricity, medicine and clothing took part in the activities, deepening exchanges between the parties. A number of local business people put questions to the Representatives of the Portuguese-speaking Countries. At the end of the Seminar, business-matching activities were also held.

The Delegation of the Permanent Secretariat of Forum Macao also visited the Jiangxi Pharmaceutical Group, which has two National Engineering Research Centres; the only company in China with such dual facilities. The aim of the visit was to gain first-hand knowledge of the group’s advanced approach to management, as well as to learn more about the way the company’s operations are developing.