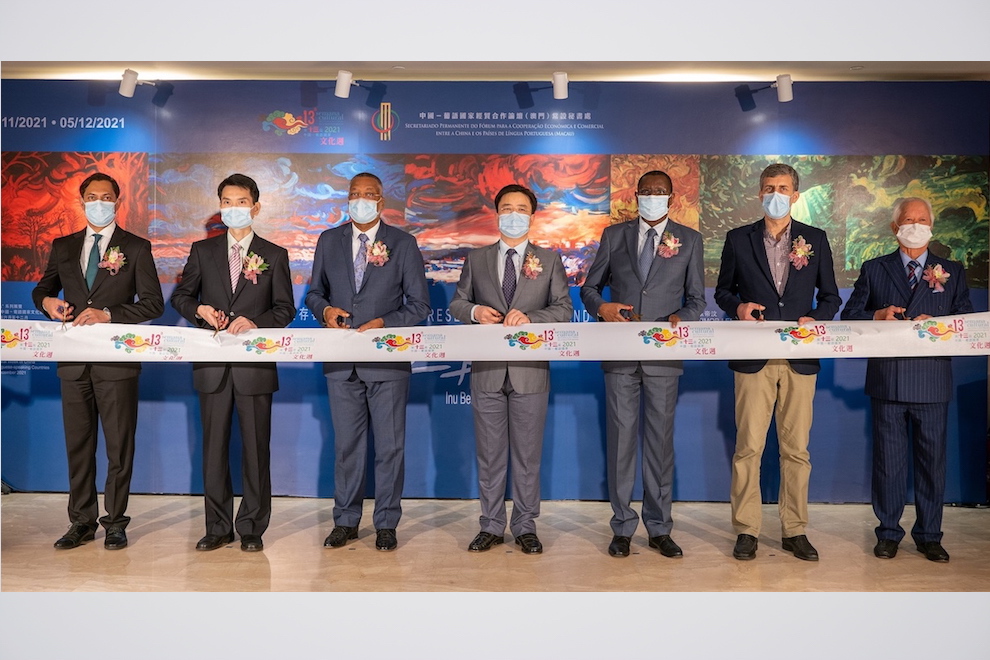 The inauguration ceremony for the “Memória e Presença” exhibition, which features work by Timor-Leste artist Mr Inu Bere, was held at the China-Portuguese-speaking Countries Commercial and Trade Service Platform Complex, on October 19, at 6.30pm. The event was organised by the Permanent Secretariat of Forum Macao, under the “Lusophone Polychromes” exhibition series, part of the 13th Cultural Week of China and Portuguese-speaking Countries.

Deputy Secretary-General of the Permanent Secretariat of the Forum for Economic and Trade Co-operation between China and Portuguese-speaking Countries (Macao), Mr Ding Tian, took part in the event and delivered a speech.

The Timor-Leste artist concerned, Mr Ibu Bere, took part in the event via videoconference. He and Mr Danilo Henriques also made speeches at the opening ceremony.

Mr Ding Tian mentioned in his speech that the Macao SAR Government’s efforts to develop Macao as a Commercial and Trade Cooperation Service Platform between China and Portuguese-speaking Countries have contributed to enhance the multilateral collaboration, cementing in Macao the “one country, two systems” principle. He added that, in order for Macao to play itsrole as a Platform, the Permanent Secretariat would continue to look for new paths to advance cultural exchanges between China and Portuguese-speaking Countries, contributing to expand cooperation ties.

Artist Mr Bere was born in 1997 in Aileu, Timor-Leste. He began his artistic training at the fine arts school Arte Mores in Díli, Timor-Leste. After receiving training in Timor-Leste, Indonesia and Brazil, he obtained his Degree in Visual Arts at the University of Vale do Paraíba, in Brazil.

Mr Bere held his first solo exhibition in 2007 and, since then, he has taken part in more than 30 individual and collective exhibitions, both in his country and in other countries and regions such as Portugal, Brazil, Macau and Japan.

Exhibition period: From November 19 to December 5, Tuesday to Sunday, from 11am to 7pm; closed on Monday. Free admission.

All are welcome to enjoy the art exhibition. To learn more about the 13th Cultural Week of China and Portuguese-speaking Countries, please visit the website https://semanacultural.forumchinaplp.org.mo/.