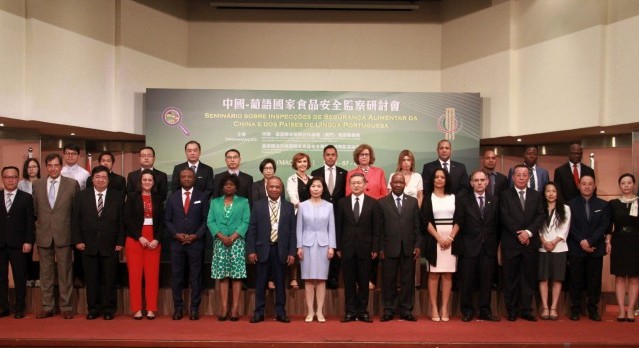 In a bid to enhance economic and trade cooperation involving China, Africa and Portuguese-speaking Countries, a delegation led by Mr Ding Tian and Mr Rodrigo Brum, Deputy Secretaries-General of the Permanent Secretariat of the Forum for Economic and Trade Co-operation between China and Portuguese-speaking Countries (Macao) visited Changsha, in Hunan Province, from June 26 to 29 in order to take part in the “1stChina-Africa Economic and Trade Expo”.

The “China-Africa Economic and Trade Expo”, co-organised by the Ministry of Commerce of the People’s Republic of China and the Hubei Provincial People’s Government, is the most important trade and economic cooperation platform under the Forum on China-Africa Cooperation. Taking as its theme “Win-Win Cooperation for Closer China-Africa Economic and Trade Partnership”, the Expo focused on a number of key areas, including trade matters, investment promotion, agriculture, technology, energy, industrial parks, infrastructure, and financing.

During the Expo, the Forum Macao delegation participated in a range of activities to boost exchanges between enterprises from various places. Forum Macao’s participation involved attendance at the opening ceremony; at the China-Africa Economic and Trade Cooperation Forum; at the Dialogue of China-Africa Infrastructure and Financing Cooperation; at the Investment Promotion Conference for Chinese Provinces and Municipalities (Hubei Province); and at the Dialogue on Investment in Ethiopia, Kenya, Zambia and Mozambique. The delegation also toured the exhibition venue of the Expo.

By taking part in the Expo, the Permanent Secretariat of Forum Macao showed its commitment to facilitating exchanges between China and African countries, so as to advance beneficial cooperation involving various parties.