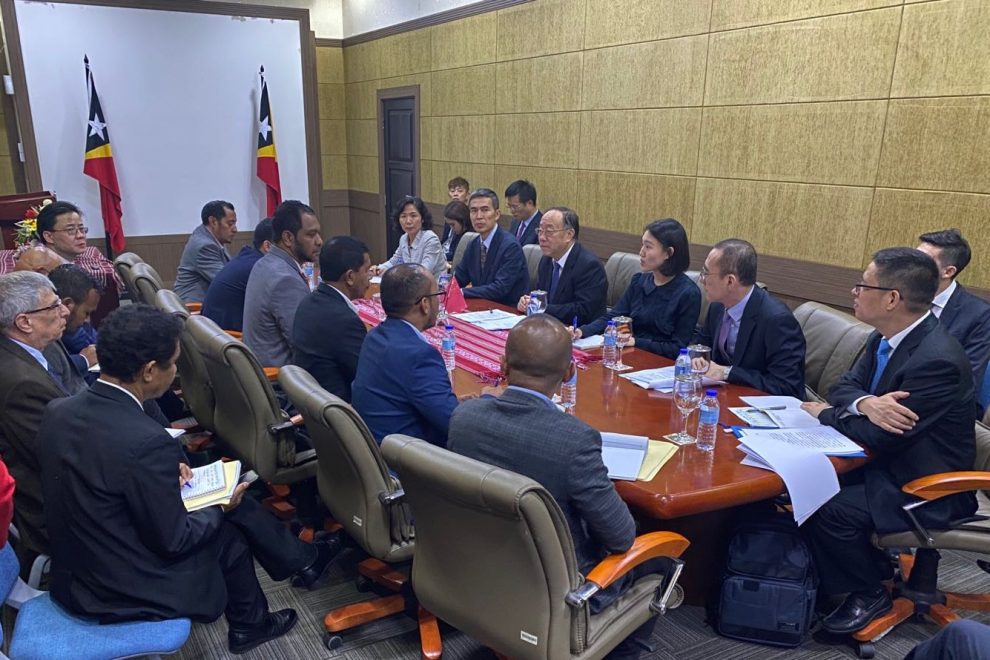 The Vice Minister of Commerce of the People’s Republic of China (PRC), Mr Wang Bingnan, led a delegation on a visit Timor-Leste from December 3 to 4.

During the trip, he met with the person who is Minister for Legislative Reform and Parliamentary Affairs, Acting Minister Coordinator for Economic Affairs, and Acting Minister for the Ministry of Tourism, Trade and Industry, Mr Fidélis Manuel Leite Magalhães. The delegation also paid a visit to the National Electrification Project of Timor-Leste and held a meeting session with Chinese enterprises in Timor-Leste.

Participants in meetings including: The Chinese Ambassador to Timor-Leste, Mr Xiao Jianguo; the Commercial Counselor of the Chinese Embassy, Mr Geng Xiewei; the Director-General of the Department of Taiwan, Hong Kong and Macau Affairs at the Ministry of Commerce of the People’s Republic of China (MOFCOM), Mr Sun Tong; the Secretary-General of the Permanent Secretariat of the Forum for Economic and Trade Co-operation between China and Portuguese-speaking Countries (Macao), Ms Xu Yingzhen; Deputy Secretary-General of Forum Macao, Mr Ding Tian; and the Representative of Timor-Leste to Forum Macao, Mr Danilo Henriques.

Vice Minister Wang said that the friendship between China and Timor-Leste was long-standing. Since establishment of diplomatic ties 17 years earlier, the political trust had continued to strengthen. In addition, high-level exchanges between both sides had been promoted; mutually beneficial cooperation of all areas had been steadily facilitated; and bilateral trade had shown an upward trend in recent years.

Mr Wang pointed out that China was willing to work with Timor-Leste to continue to strengthen collaboration that was varied in scope: namely in the fields of infrastructure, agriculture, fisheries and medical and health care; and wanted the fruit of those efforts to be shared with people on both sides.

Vice Minister Wang also gave an overview of Forum Macao and shared his insights of China’s work in organising the 6th Ministerial Conference of the Forum of Economic and Trade Cooperation between China and Portuguese-speaking Countries. He looked forward to working with Timor-Leste to arrange preparations for the Ministerial Conference.

Based on the foundation laid by five previous Strategic Plans for Economic and Trade Co-operation produced by the previous Ministerial Conferences, China would jointly work with Timor-Leste and other Portuguese-speaking Countries to plan fresh priorities for cooperation as well as plans to promote more prosperous cooperation between both sides under the framework of Forum Macao.

Mr Wang recognised Macao’s role as an important hub and bridge for cooperation between China and the Portuguese-speaking Countries. The construction of “one platform, three centres” – for Macao’s cooperation service platform role – had been pushed forward. It provided further channels for quality products and services from the Portuguese-speaking Countries to enter the Mainland China market.

China also hoped that Timor-Leste and other Portuguese-speaking Countries would give full play to Macao as a service platform, in order to deepen cooperation between the various sides. Timor-Leste had been invited to take part in the 3rd China International Import Expo to further strengthen the economic and trade cooperation between both parties.

Minister Magalhães warmly welcomed Mr Wang and his delegation. Mr Magalhães expressed appreciation for China having invited Timor-Leste to take part in the 6th Ministerial Conference of the Forum for Economic and Trade Cooperation between China and Portuguese-speaking Countries, and said that the country would actively consider sending a high-level delegation.

He mentioned that Timor-Leste was willing to work with China in planning the agenda and subsequently to discuss jointly the Conference’s resolutions. He pointed out that Timor-Leste was promoting the implementation of its national economic strategic plan, striving to push forward tourism, trade and industrial development; creating ways to improve the business and investment environment; opening up markets for its exports in order to enhance the quality of the country’s economic development; and realising the development of economic diversification as a consequence. Timor-Leste welcomed Chinese companies to invest in the country and was willing actively to explore cooperation with China in all fields.

Brazil’s Minister of Science, Technology and Innovation participates in event of Ibrachina

Huawei to participate in MOZTECH