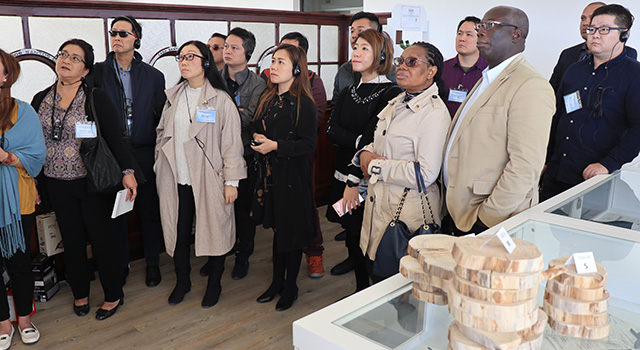 A delegation from the Permanent Secretariat of the Forum for Economic and Trade Co-operation between China and Portuguese-speaking Countries (Macao), together with the Macau Trade and Investment Promotion Institute, headed to Portugal on November 20, as the “China-Portugal Enterprises Economic and Commercial Meeting” was being held. During its official trip, the delegation visited Portuguese public departments and companies.

Forum Macao’s three Deputy Secretaries-General visited AICEP Global Parques, a company majority-held by AICEP Portugal Global – Trade & Investment Agency and ISTEC’s research centre. All sides exchanged views on how to make the most of Forum Macao’s role as a platform and how to boost economic and trade cooperation between China and Portuguese-speaking Countries.

The delegation visited Lisbon’s POAO Centre as well, where it met the Centre’s management team to exchange views on the promotion of products from China and Portuguese-speaking Countries. The delegation also visited Casa Santos Lima, where it got to know the farm and its operation, a fruitful exchange towards adding its products to Macao’s “Portuguese-speaking Countries Food Product Exhibition Centre,” which provides a window for exports into the Chinese market.