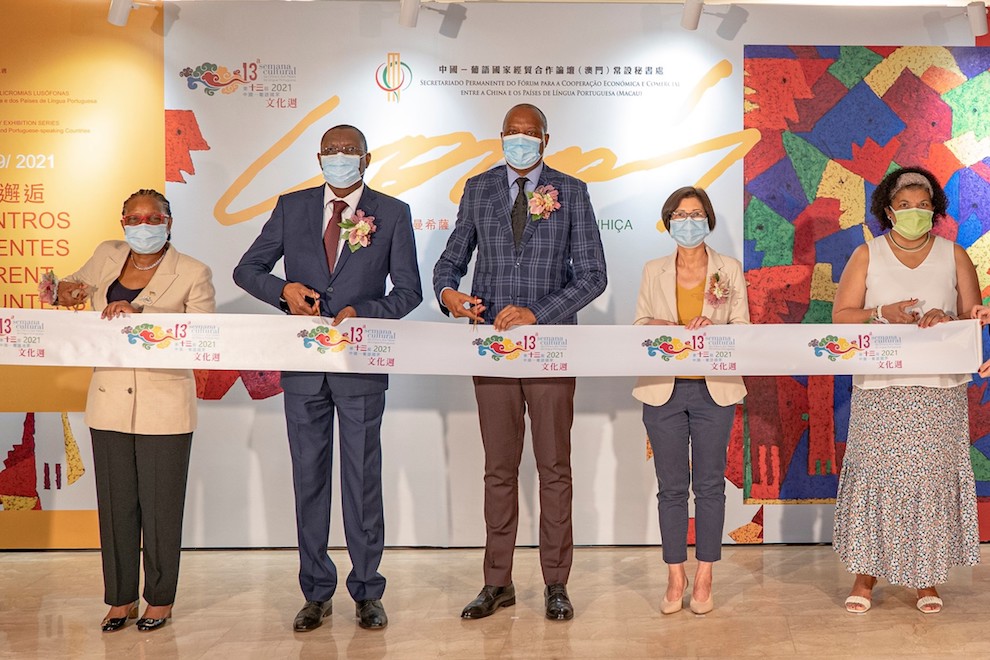 The inauguration ceremony for the “Different encounters” exhibition, featuring work by Mozambican artist José Estevão Manhiça, also known as “Vovo’s”, was held at the China-Portuguese-speaking Countries Commercial and Trade Service Platform Complex on Friday, September 3, at 6.30pm. The event was organised by the Permanent Secretariat of the Forum Macao, under the series “Lusophone Polychromes”, part of the 13th Cultural Week of China and Portuguese-speaking Countries.

In his speech, Deputy Secretary-General Mr Paulo Jorge Rodrigues do Espírito Santo said the exhibition would help to boost cultural cooperation between China and Portuguese-speaking Countries. He reiterated that Forum Macao will remain at the forefront of efforts to promote the art and culture of all participating countries in Forum Macao. The friendship between China and Portuguese-speaking Countries is once again on full display via art and culture, said Mr do Espírito Santo.

The Consul-General of Mozambique in Macao, Mr Rafael Custódio Marques, said the exhibition bears witness to the Mozambican way of life. He expressed hope that all of those visiting the exhibition will feel like they are watching a photo album of their rendezvous with a simple people and with political, cultural and sports figures. Mr Marques hopes visitors to the exhibition will want to get in touch with a country keen on promoting its art and culture overseas.

José Estevão Manhiça took a painting and analytical design course at Mozambique’s National School of Visual Arts. He has hosted a number of solo exhibitions and engaged in various group exhibitions since 1994. His works can be found at the art collections of the Mozambican Presidency, government departments and banks, as well as in Portugal, Germany, United States, Spain, and Sweden.

Mr Manhiça strives to promote the art and culture of Mozambique in a series of works influenced by Cubism and Surrealism, in which he uses bright colours to talk about peace in his country and to convey joy and happiness. The artist also seeks to share an educational and critic message with the younger generations on the role of human coexistence in the wellbeing of society.

Exhibition period: From September 3 to 19, Tuesday to Sunday, from 11am to 7pm; closed on Monday. Free admission.

The Association of Friends of Mozambique is holding three workshops in tandem with the exhibition, inviting artists to teach Tufo dance, the traditional Marrabenta dance, and the Xigubo warrior dance, along with several traditional games such as Pindjonce, Neca, and N’Txuva, known as African chess. The goal is to take participants on a cultural voyage to Mozambique.

All are welcome to enjoy the exhibition. To learn more about the 13th Cultural Week of China and Portuguese-speaking Countries, please visit the website https://semanacultural.forumchinaplp.org.mo/.