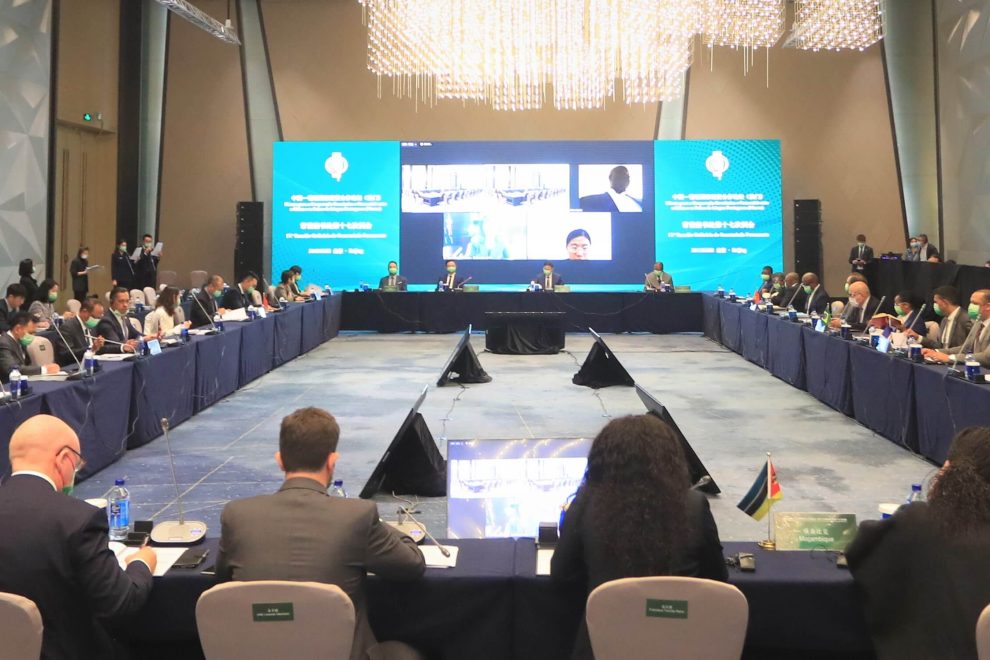 The 17th Ordinary Meeting of the Permanent Secretariat of the Forum for Economic and Trade Co-operation between China and Portuguese-speaking Countries (Forum Macao) was held in Beijing on October 31. The meeting was attended by more than 40 people, namely the delegation of the Permanent Secretariat of Forum Macao headed by Secretary-General Ji Xianzheng, and representatives of the Ministry of Commerce of the People’s Republic of China (MOFCOM), the Macao SAR Government, and the embassies of Portuguese-speaking countries in China. Representatives of the Economic Affairs Department of the Liaison Office of the Central People’s Government in Macao SAR, and liaisons from Angola, Brazil and Portugal attended the meeting online.

During the Ordinary Meeting, Secretary-General Ji Xianzheng reviewed the work carried out by the Permanent Secretariat of Forum Macao from 2021 to 2022, and introduced the key tasks for the fourth quarter of 2022. Delegates at the meeting made positive appraisals of the work accomplished by the Permanent Secretariat. They spoke highly of the timely adjustment of its work content and patterns and the remarkable results achieved amid the COVID-19 pandemic. The delegations showed appreciation for the successful hosting of the Extraordinary Ministerial Meeting of Forum Macao, and expressed the hope that all parties would strengthen cooperation, promptly implement the consensus reached at the Extraordinary Ministerial Meeting of Forum Macao, promote further cooperation in infrastructure and production capacity between China and Portuguese-speaking countries through the Macao platform and the China-Portuguese Speaking Countries Cooperation and Development Fund, and optimize cooperation in human resources in the face of the pandemic. The delegates hoped that the Permanent Secretariat would, as always, pay attention to the living and working conditions of deputy secretaries-general and representatives in Macao sent by Portuguese-speaking countries. The delegates of Portuguese-speaking countries appealed to competent authorities to assist in facilitating entry into Macao for residents of Portuguese-speaking Asian and African countries. At the end of the meeting, delegates of all parties signed the minutes.

This year’s new members of the Permanent Secretariat of Forum Macao, as well as new liaisons of Angola, Brazil, China and Mozambique, were introduced at the meeting. Equatorial Guinea, which officially joined Forum Macao in April 2022, was represented for the first time at the Ordinary Meeting.