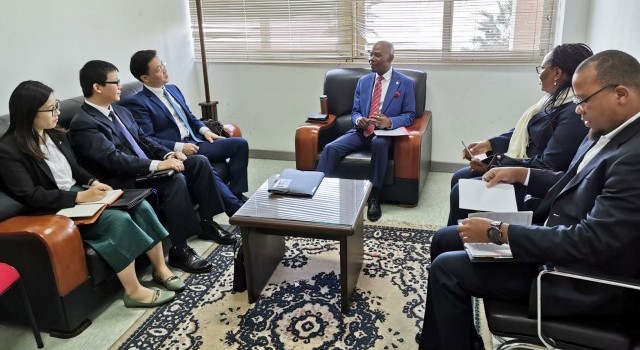 A delegation of the Permanent Secretariat of the Forum for Economic and Trade Co-operation between China and Portuguese-speaking Countries (Macao) visited Mozambique from July 12 to 14. There the delegation met with: the Director for Asia and Oceania at Mozambique’s Ministry of Foreign Affairs and Cooperation, Mr António Inácio Júnior; Mozambique’s Minister of Industry and Trade, Mr Ragendra de Sousa; and the Director-General of Mozambique’s Investment and Export Promotion Agency (APIEX), Mr Lourenço Sambo.

During the meeting, Forum Macao Deputy Secretary-General Mr Ding Tian delivered a progress report on work conducted by Forum Macao last year, highlighting the external evaluation applied to Forum Macao. There was also an exchange of opinions on the preparations for the next Ministerial Conference.

Mr Ding said that the Permanent Secretariat had held a number of activities every year to strengthen liaison and cooperation with Mozambique and other Portuguese-speaking Countries, to promote bilateral exchanges and to deepen the rapport between Forum Macao and Portuguese-speaking Countries. Such effort was namely with regard to investment policies, market opportunities, business environments, and on how each country’s advantages could be utilised in a complementary way, while all involved made the most of Macao’s role as a platform in order to expand business cooperation to new areas.

Mr Inácio Júnior emphasised the strategic cooperation partnership between Mozambique and China in which business ties had played a crucial role in both bilateral and multilateral areas, in particular within the framework of Forum Macao. He called for more promotion to broaden the influence of Forum Macao, and effort to make full use of bilateral and multilateral mechanisms, as well as to create new models of cooperation. Such models could include projects involving Build-Operate-Transfer (BOT) and Build-Own-Operate (BOO) conducted in a flexible way; particularly in relation to production capacity projects.

Mr Inácio Júnior also said Mozambique would continue to play an active role in the “Belt and Road” initiative by attending major events such as the China International Import Expo in Shanghai. Mozambique would make every effort to support the preparatory works for the 6th Ministerial Conference, he added, calling on China to take part in the Maputo International Fair to be held in August.

During the visit of the Permanent Secretariat’s delegation to Mozambique’s Ministry of Industry and Trade, and to the Investment and Export Promotion Agency (APIEX), the Minister of Industry and Trade Mr de Sousa stated that Forum Macao had developed a variety of activities with remarkable results, actively contributing to economic and trade cooperation between China and Mozambique. He also thanked the Permanent Secretariat for its efforts to promote the export of Mozambican agricultural products to China.

The Macau • China Diamond and Gem Exchange’s representative among the Permanent Secretariat delegation took the opportunity to deliver a presentation on the business situation of the Exchange, while also mentioning the trade potential of precious-stone mining in Mozambique. In addition, the Exchange representative kept the Minister up-to-date on cooperation negotiations with Empresa Moçambicana de Exploração Mineira (EMEM), noting that both sides had agreed to step up pragmatic cooperation by taking advantage of the Macao platform.

A delegation from the Permanent Secretariat of Forum Macao led by Deputy Secretary-General Mr Ding travelled to Portugal, Angola, São Tome and Príncipe and Mozambique from July 2 to 15 to fulfil the goals set out in the Strategic Plan for Economic and Trade Cooperation and the Memorandum of Understanding on Promoting Co-operation in Production Capacity, both signed during the 5th Ministerial Conference of Forum Macao. The tour by the delegation featured a number of economic and trade promotion activities, including: the 14th Meeting of Entrepreneurs for Economic and Trade Cooperation between China and Portuguese-speaking Countries; visits in the various countries to government entities that supervise Forum Macao affairs; and visits to investment and trade promotion institutions. All the activities proved very fruitful.