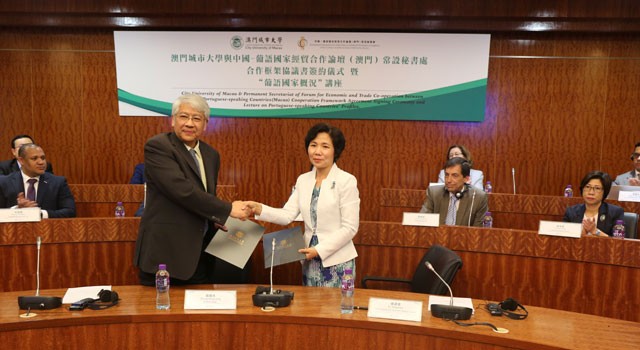 The Permanent Secretariat of the Forum for Economic and Trade Co-operation between China and Portuguese-speaking Countries (Macao), also known as Forum Macao, signed on May 25 a cooperation framework agreement with City University of Macau. The parties were represented respectively by the Secretary-General of the Permanent Secretariat, Ms Xu Yingzhen, and by the Rector of the City University of Macau, Dr Zhang Shuguang.

The event also included a seminar, during which Representatives from the Portuguese-speaking Countries in Forum Macao made presentations about their respective countries.

During the event, Ms Xu thanked City University of Macau for the support it had given Forum Macao, namely by hosting a number of seminars on behalf of the Training Centre of Forum Macao. She also noted that the university was part of an alliance between several higher education institutions in Macao for training qualified human resources proficient in both Chinese and Portuguese. Ms Xu also noted the university had set up an Institute for Research on Portuguese-Speaking Countries.

Ms Xu said the framework cooperation agreement would – based on Macao’s role as a platform for cooperation and exchanges between China and the Portuguese-speaking Countries – help position the city as base for training of human resources bilingual in Portuguese and Chinese, as agreed during the 5th Ministerial Conference of Forum Macao.