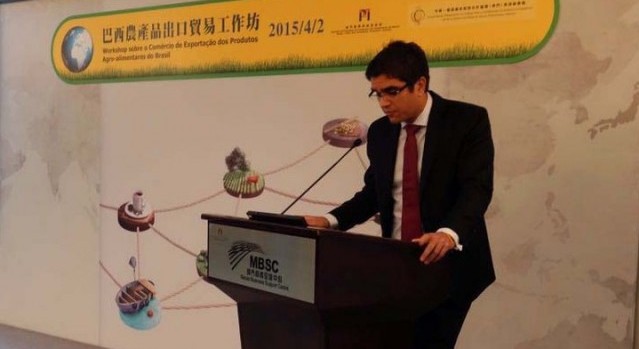 The Macao Trade and Investment Promotion Institute (IPIM) and the Permanent Secretariat of the Forum for Economic and Trade Co-operation Between China and Portuguese-speaking Countries (Forum Macao) on Thursday April 2, 2015, held a workshop on agro-food products from Brazil.

The workshop was held at IPIM’s Macao Business Support Centre and attracted more than 140 people, including representatives from economic and trade bodies, businesspeople and investors. The initiative allowed participants better to understand Brazil’s trade system for agri-food products, while also aiming to develop economic and trade co-operation between Macao and Brazil.

Mr Augusto César Castro, First Secretary at the Embassy of Brazil in Beijing and Representative to the Permanent Secretariat of Forum Macao, was one of the invited speakers.

The workshop included a presentation targeting sales agents and distributors of agri-food products and other goods from Brazil, and on the country’s trade system. Participants were also briefed on the latest economic data for the Brazilian market.

During the event, some guests shared their business experiences on the trade of products from Brazil. Invited speakers included Ms Jenny Tong, General-Director of Seng Pan International Company Ltd., and Mr Fernando Marques, President of CME Restaurant and Bar.

“As the largest national market among Portuguese-speaking Countries in terms of size, population and economic dimension, co-operation and exchanges between Brazil and Macao have been growing over the past few years, with emphasis on economy and trade, tourism, sports and culture, among other areas,” said Mr Jackson Chang, President of IPIM, in his welcoming speech at the opening of the workshop.

“In 2014, the trade volume between Macao and Brazil amounted to US$41 million, a 36-percent increase over the previous year. Currently, Brazil is Macao’s largest trading partner among Portuguese-speaking Countries and also among countries from Latin America. Macao imports several types of Brazilian goods, including frozen pork, beef and frozen chicken wings,” Mr. Chang added.

The workshop included a showcase of Brazilian food products, including coffee, bread made with Brazilian flour and sugar, and soft drinks produced by factories in China created by Brazilian companies.

Business matching and consulting services were also made available at the event.

Among the participants at the workshop were Forum Macao members from: the SME Association; International Lusophone Markets Business Association; São Paulo Trade Association; and Macao Goldsmith’s Guild. In addition, the event was attended by businesspeople and representatives of trade bodies from Guangzhou, Shenzhen, Hong Kong, Zhuhai, Zhongshan and Jiangmen, among other neighbouring cities.