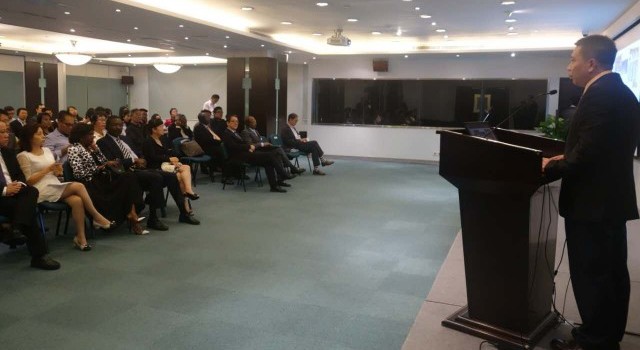 The Macao Trade and Investment Promotion Institute (IPIM) and the Permanent Secretariat of the Forum for Economic and Trade Co-operation between China and Portuguese-speaking Countries (Macao), also known as Forum Macao, jointly organised – with the support of the Foshan Delegation of the China Council for the Promotion of International Trade (CCPIT) – the “Workshop on Investment Environment and Business Opportunities in Angola”.

The aims of the Workshop were: to reinforce Macao’s role as a platform of services for economic and trade co-operation between China and Portuguese-speaking Countries; to deepen regional economic co-operation; and to support small and medium-sized enterprises (SMEs) from Macao and neighbouring regions in improving their knowledge of the markets of the Portuguese-speaking Countries.

The event, held in IPIM’s Macao Business Support Centre on July 24, attracted more than 80 representatives from trade and economic organisations, as well as business people and investors from Macao, Zhuhai and Foshan – among other regions – operating in the fields of construction; tourism; banking; exhibitions; retailing; logistics; and transportation.

According to IPIM’s Ms Lau, there is great degree of complementarity between the two countries in the economic and trade sectors. She pointed out that there is enormous potential for co-operation in the fields of electricity supply, railways, agriculture, manufacturing and infrastructure, among others. Macao, she added, could play a unique role in this co-operation, as a platform of services for economic and trade co-operation between China and Portuguese-speaking Countries.

IPIM has often organised visits involving Macao and Mainland China business delegations to Angola and events involving Angolan delegations. Delegation visits to Angola have included attendance at Luanda International Trade Fair (FILDA). Visits by Angolan delegations outside the country have included the “Meeting of Businesspeople for the Economic and Trade Co-operation Between China and Portuguese-speaking Countries”. Additionally, Angola’s Ministry of Commerce and Angola’s Chamber of Commerce and Industry are some of the official entities co-operating in the “Economic and Trade Co-operation and Human Resources Portal Between China and Portuguese-speaking Countries”.

During the Workshop, participants improved their knowledge about the investment environment and business opportunities in Angola, which could further promote the development of economic and trade co-operation between Macao and Angola.

Guest speaker Mr Belarmino Barbosa, Angola’s Delegate in the Permanent Secretariat of Forum Macao, gave an introduction to the investment environment and the business opportunities available in Angola. Mr Wang Yi, Chairman of Foshan-based Winhope, was also a speaker at the Workshop, explaining several investment projects his company has in Angola. The projects were related to the sale of Chinese cars, as well as to the launch of manufacturing units and car brands in that country. Representatives of Winhope have often visited Macao. Every year the company takes part in the Macao International Trade and Investment Fair (MIF), aiming to explore new markets and find new business opportunities.

During a question and answer session at the Workshop, participants raised questions on how to establish a company Angola, about the investment situation of Chinese companies there, and about that country’s human resources.