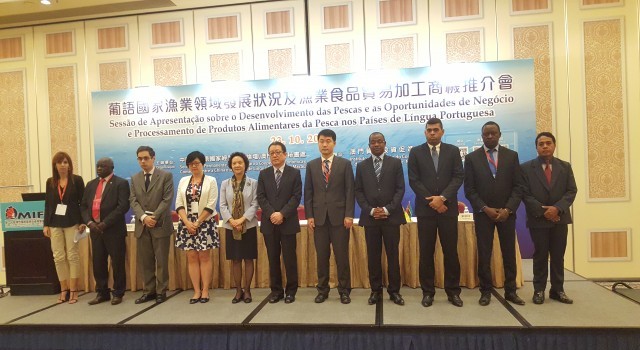 The Workshop on business opportunities in fishing and processing of fishery products in Portuguese-speaking Countries took place on the afternoon of October 23, at Cotai Expo, the convention and exhibition centre of the Venetian Macao. The Workshop was organised by the Forum for Economic and Trade Co-operation between China and Portuguese-speaking Countries (Macao), with support from the Macao Trade and Investment Promotion Institute (IPIM).

The Workshop’s aims were to deepen the knowledge of its participants regarding the fishing industry and the processing of fishery products in Portuguese-speaking Countries; and to promote co-operation with Mainland China and Macao; thus enhancing the role of Macao as a service platform between China and the lusophone world.

Participants in the Workshop included: the Secretary-General of the Permanent Secretariat of Forum Macao, Mr Chang Hexi; the Representative of China’s Ministry of Commerce and Director-General of Economic Affairs Department of the Liaison Office of the Central People’s Government in the Macao SAR, Ms Chen Xing; the Deputy Director-General of the General Affairs Department of the Commissioner of China’s Ministry of Foreign Affairs in Macao SAR, Mr Wang Yuan; IPIM’s Executive Director, Ms Glória Batalha Ung; the Department Chief at the Ministry of Fisheries of Angola, Mr Nelson Samuel; Brazilian diplomat, Mr Daniel Costa Figueiredo; the Economic Advisor to the Minister of Fisheries and Fishery Resources of Guinea-Bissau, Mr António Domingos Tubento; the Director-General of the National Fisheries Administration of Mozambique, Mr Simeão Lopes; the representative in Macao of Aicep Portugal Global – Portugal’s trade and investment agency –, Ms Manuela Ferreira Dias; and the Director of Agriculture and Fisheries at the Ministry of Fisheries of East Timor, Mr Acácio Guterres.

The Secretary-General of the Permanent Secretariat of Forum Macao, Mr Chang Hexi, delivered a speech of welcome.

It was the first time that the Permanent Secretariat of Forum Macao had organised such Workshop. The event attracted about 70 participants, including representatives from the fishing industry and leaders in economic and trade fields from Portuguese-speaking Countries.

During the meeting, representatives from each of the Portuguese-speaking Countries gave a brief presentation about the development of the fishing industry, and the trade and processing of fishery products in their respective countries. The presentations included explanations about incentive policies, export standards and food labelling regulations. A session enabling Workshop participants to exchange views was held after the Workshop proper.

Portuguese-speaking Countries are considered to have inherent economic advantages for the development of fishing and fishing-related industry. Many of them share the characteristic of possessing extensive coastline, control vast maritime exclusive economic zones, and have an existing high-quality commercial fishing industry. The governments of Portuguese-speaking Countries have given increasing importance to the fishing industry, strongly encouraging the development of the aquaculture sector, of commercial fishing and of the processing of fishery products.

It is expected that the “One Belt, One Road” initiative – promoted by China – will help boost co-operation in fisheries between China and Portuguese-speaking Countries.

The Workshop had strong support from China, Macao and Portuguese-speaking Countries, and helped to promote co-operation and exchanges between those places in several fields, including: technology; equipment; production; processing; trade; and training.

The Workshop also helped to promote Forum Macao, and the “Macao Platform, Three Centres” strategy of the Macao Government, enhancing Macao’s role as a regional and global economic and commercial platform.