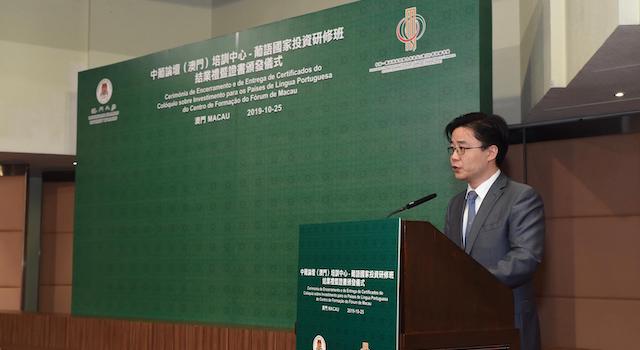 The closing and certificate award ceremony of the Seminar on Investment Cooperation for Participants from Portuguese-speaking Countries was held at the World Trade Center Macau’s Lotus Room on 25 October. The seminar was organised by the Training Centre of Forum Macao, and co-organised by the University of Macau.

Officiating guests at the closing ceremony included: Deputy Secretary-General of the Permanent Secretariat of Forum Macao Mr Ding Tian;  Deputy Director-General of the Economic Affairs Department of the Liaison Office of the Central People’s Government in the Macao SAR, Ms Li Huaying; the Consul-General of Angola in the Macao SAR, Ms Sofia Pegado da Silva; the Consul-General of Mozambique in Macao, Mr Rafael Custódio Marques; the Vice Consul of Portugal in Macao and Hong Kong, Ms Maria Carolina Lousinha; Vice Rector of the University of Macau Mr Ge Wei; and the Representatives from the Portuguese-speaking Countries to the Permanent Secretariat of Forum Macao.

In his speech, Mr Ding said that investment cooperation was a very important area of economic and trade cooperation between China and the Portuguese-speaking Countries. Since its establishment, Forum Macao had been vigorously promoting investment cooperation between the two sides, to support collaboration on industrialisation, infrastructure development, and the socio-economic development of the Participating Countries in Forum Macao. He said this had led to win-win situations for both sides.

The Seminar on Investment Cooperation for Participants from Portuguese-speaking Countries took place in Macao between 14 and 17 October. It was the fourth training seminar organised by the Training Centre of Forum Macao in 2019. A total of 30 participants – including officials and experts from areas related to investment promotion – took part in it. They came respectively from Cabo Verde, Guinea-Bissau, Mozambique, Portugal, São Tomé and Príncipe, and Timor-Leste.

Brazilian Ministry of Health plans to purchase vaccines from China