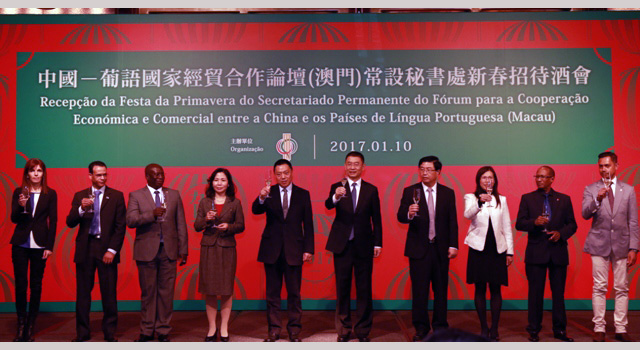 The Permanent Secretariat of the Forum for Economic and Trade Co-operation between China and Portuguese-speaking Countries (Macao), also known as Forum Macao, held a Spring Festival Reception for 200 guests at 12 pm today at MGM Hotel. Participants in the event included: the Deputy Director-General of the Liaison Office of the Central People’s Government in the Macao SAR, Mr Yao Jian; the Secretary for Economy and Finance of the Government of the Macao SAR, Mr Leong Vai Tac; the Deputy Commissioner of the Office of the Commissioner of the Ministry of Foreign Affairs of the People’s Republic of China in the Macao SAR, Mr Cai Siping; the respective Consuls-General and Honorary Consuls of Portuguese-speaking Countries in Macao; representatives from, respectively, the Qingdao and Zhoushan Municipal Governments; and several representatives from the fields of manufacturing, trade, finance, conventions and exhibitions, engineering, legal affairs, culture and education, and health, as well as representatives from youth organisations and higher education institutions. They were joined by businesspeople and officials with connections to China and Portuguese-speaking Countries.

In October 2016, Forum Macao’s 5th Ministerial Conference was held, honoured by the presence of His Excellency Premier Li Keqiang. At the Opening Ceremony, Premier Li announced a total of 18 new measures to promote economic and trade co-operation between China and Portuguese-speaking Countries. During his visit to Macao, he also presented a total of 19 policies aimed at contributing to the territory’s economic development and promoting its role as a Service and Trade Platform between China and Portuguese-speaking Countries (known as the “One Platform” policy).

In his speech during the Spring Festival Reception, Deputy Director-General of the Liaison Office Mr Yao said that – with the support provided by the Central People’s Government and efforts made by the Macao SAR Government – Macao had achieved encouraging results in implementing the “One Platform” policy, with the city’s international image significantly strengthened. He also expressed his wish that individuals from different sectors of society work together to develop the “One Platform” policy, and to promote Macao’s adequate economic diversification.

Secretary Leong said during the reception that – following the measures announced by Premier Li in 2016 and within the framework of the Committee for Development of the Commercial and Trade Cooperation Service Platform between China and Portuguese-speaking Countries – fresh efforts would be made by the Macao SAR Government to include the “One Platform” policy in the national strategic development initiative known as “Belt, and Road”. He added that would allow the Macao Platform further to widen its scope and improve its results.

The Secretary-General of Forum Macao, Ms Xu, said the Permanent Secretariat of Forum Macao would diligently promote the strengthening of economic and trade co-operation between China and Portuguese-speaking Countries, actively pursuing the implementation of decisions reached at the 5th Ministerial Conference. Ms Xu said her team would continue developing co-operation in several fields, including: production capacity; trade and investment; human resources; and cultural exchanges; as well as promoting links between different provinces and municipalities. These efforts would be pursued under the guidelines of the Strategic Plan for Economic and Trade Co-operation, supporting the development of Macao as a Commercial and Trade Cooperation Service Platform between China and Portuguese-speaking Countries.

Guests taking part in the Spring Festival Reception – including representatives from different sectors of society, associations and companies – expressed satisfaction with the results of the 5th Ministerial Conference, highlighting the work developed by the Permanent Secretariat of Forum Macao last year. Participants in the Spring Festival Reception also exchanged views on: the development of the “One Platform” policy; the deepening of economic and trade co-operation between Mainland China, Macao and Portuguese-speaking Countries; and the promotion of Macao’s adequate economic diversification.