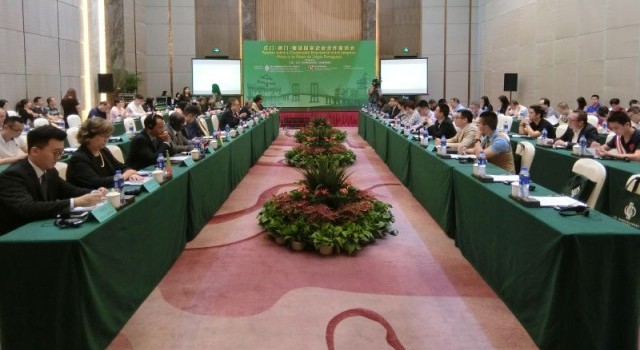 The seminar was organised by the Permanent Secretariat of the Forum for Economic and Trade Co-operation between China and Portuguese-speaking Countries (Forum Macao), the Macao Trade and Investment Promotion Institute (IPIM) and the Jiangmen Municipal Trade Bureau.

Attending the seminar were the Secretary-General of the Permanent Secretariat of Forum Macao, Mr Chang Hexi; the Senior Manager of the Promotional Activities Department of IPIM, Mr Sam Lei; the representative of the Jiangmen Municipal Trade Bureau, Mr Li Zhaoxian; as well as several business people.

The seminar also included an exchange session and a business matching session between Delegates of Portuguese-speaking Countries at the Permanent Secretariat of Forum Macao and representatives of companies from Jiangmen.

Representatives of the companies had the opportunity to interact with the Delegates of Portuguese-speaking Countries, an activity that highlights the role of Macao as a service platform and creates more opportunities for companies from Mainland China – especially from Jiangmen – to expand to international markets.