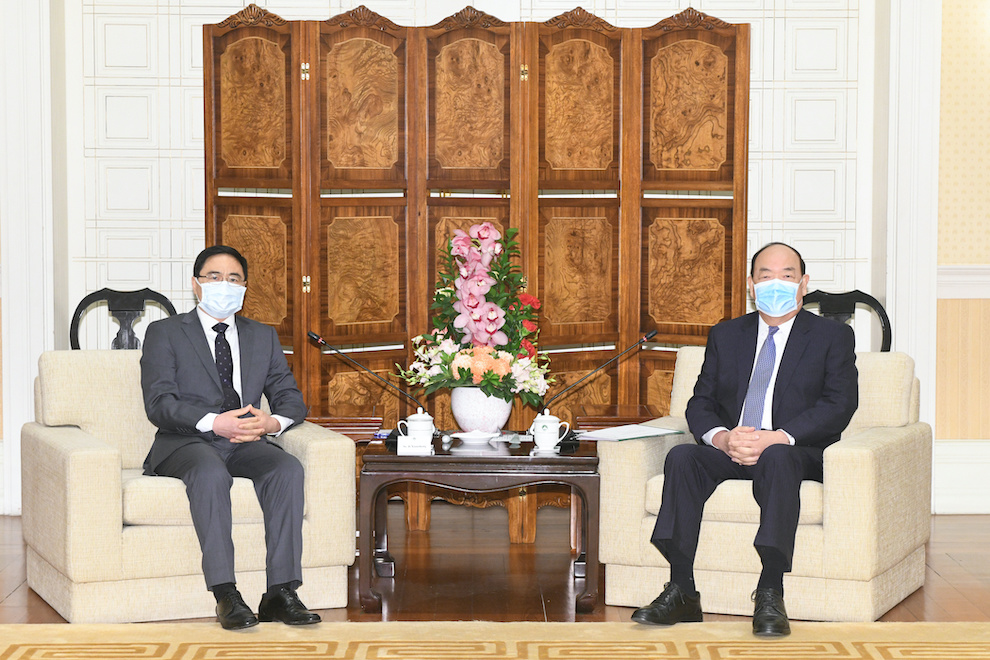 The Secretary-General of the Permanent Secretariat of Forum Macao, Mr Ji Xianzheng, had on January 27 a meeting at the Government Headquarters with the Chief Executive of the Macao Special Administrative Region (MSAR), Mr Ho Iat Seng. It was to hear Mr Ho’s opinions on, and proposals regarding, Forum Macao’s development, and to discuss the work already carried out by the Permanent Secretariat.

The Chief Executive gave an update on Macao’s latest economic development, and the effectiveness of the MSAR Government’s measures to combat the COVID-19 pandemic. Mr Ho said that the pandemic had been having a strong impact on the global economy, and had highlighted the need to promote the adequate diversification of Macao’s own economy.

Mr Ho said that since the establishment of Forum Macao, the body had been pursuing an active role in promoting Macao as a platform between China and Portuguese-speaking Countries. The Chief Executive added that he hoped Forum Macao would make the most of Macao’s unique advantages, as well as the opportunities arising from the development of the Guangdong-Macao Intensive Cooperation Zone in Hengqin, in order to allow a greater number of companies from Macao to have a larger role in promoting further economic and trade cooperation between Mainland China, the Portuguese-speaking Countries, and Macao.

The MSAR Government would continue its work of offering strong support to Forum Macao, and to the Permanent Secretariat, contributing to strengthen Macao’s role as a platform, and to extend further the commercial and trade exchanges between China and Portuguese-speaking Countries.

Mr Ji expressed his gratitude for the support given by the MSAR Government to Forum Macao and to the Permanent Secretariat. He added that all participating governments had, since Forum Macao’s establishment 18 years ago, paid great attention to Forum Macao’s work, based on the path laid out by the five previous editions of the Ministerial Conference.

Looking ahead, Forum Macao would step up its effort. The aim would be to form consensus, create innovate working methods, and to explore new areas in which it could serve and respond to the development needs of each participant in Forum Macao, while also supporting economic recovery among its members. These efforts would be in order to further ties and cooperation between China and Portuguese-speaking Countries, and to contribute further to Macao’s adequate economic diversification.

The Secretary-General also shared with the Chief Executive some information regarding the Permanent Secretariat’s programme of activities.