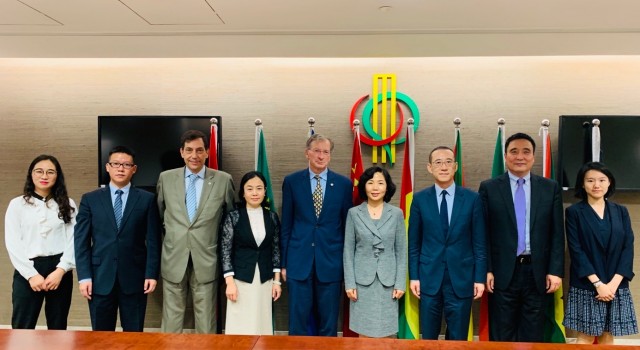 The Secretary-General of the Permanent Secretariat of the Forum for Economic and Trade Co-operation between China and Portuguese-speaking Countries (Macao), Ms Xu Yingzhen, and the Director-General of the Department of Hong Kong, Macao and Taiwan Affairs at the Ministry of Commerce, Mr Sun Tong, received a delegation on 18 November led by the new Executive Director of the International Tropical Timber Organisation (ITTO), Mr Gerhard Dieterle. Deputy Secretary-General of Forum Macao, Mr Rodrigo Brum, also attended the meeting.

Secretary-General Ms Xu welcomed Mr Dieterle to the Permanent Secretariat of Forum Macao. She expressed gratitude to the Executive Director and his expert team, for visiting Macao and for their role in the Training Workshop on Tropical Timber Investment and Trade between China and Portuguese Speaking Countries and Cooperation on Global Green Supply Chain for Forest Products.

Ms Xu mentioned that promoting cooperation in relation to natural resources and environmental protection had been crucial topics at the 5th Ministerial Conference of Forum Macao. China and several Portuguese-speaking Countries were currently member-nations of ITTO. The recent training workshop was the first of its kind jointly organised by Forum Macao and ITTO.

The Secretary-General said the Permanent Secretariat of Forum Macao wanted this to be the first step in its collaboration with ITTO, making use of Macao as a service platform to promote cooperation between China and Portuguese-speaking Countries, namely in the fields of construction, investment and trade, market development and green finance.

The Director-General of the Department of Hong Kong, Macao and Taiwan Affairs at the Ministry of Commerce, Mr Sun, said China continued to uphold the principles of environmental protection and sustainable development; principles that were aligned with ITTO’s development philosophy. He said additionally that Forum Macao was committed to the sustainable development of Macao’s role as a Commercial and Trade Cooperation Service Platform between China and Portuguese-speaking Countries. He also said he hoped the recent workshop would be the foundation for active international cooperation in various fields. Mr Sun said he believed there was ample space for the cooperation between Forum Macao and ITTO to generate a ‘win-win’ outcome.

ITTO’s Mr Dieterle expressed his gratitude for the warm welcome offered by the Permanent Secretariat of Forum Macao. He said ITTO aimed to cooperate with institutions across the globe to promote preservation of natural resources and forest sustainability in terms of management, development and trade.

Mr Dieterle said he also wished such cooperation to be the starting point for advocating rational use of, and trade in, tropical timber resources. Such efforts would lead to raised awareness of the Global Green Supply Chain for Forest Products, and to explore more efficiently a model for cooperation between the two sides.