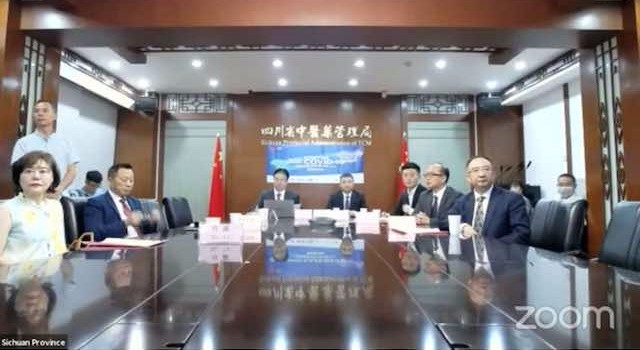 A second series of Webinars on International Cooperation Against Covid-19 was held successfully thanks to a number of bodies, including: China’s Embassy in Brazil; China’s Consulate-General in Rio de Janeiro; the Foreign and Overseas Chinese Affairs Office of the Sichuan Provincial People’s Government; and the State Government of Minas Gerais, in Brazil. The Permanent Secretariat of Forum Macao supported this series of events and encouraged governmental representatives and representatives of other institutions from respectively the Macao SAR and the Portuguese-speaking Countries, to take part.

A total of four sessions was held –respectively on July 14, 21, and 28, and on August 4 – as components of the second series of Webinars on International Cooperation Against Covid-19. The series focused on sharing information on: front-line experience of tackling the pandemic; promoting research on traditional Chinese medicine; and deepening economic and trade collaboration. Each of the four sessions of the Webinar series was delivered in videoconference format, with live online streaming to international audiences via YouTube; and live online streaming to Mainland China audiences via Kuaishou.

Representatives from Sichuan Province stressed that its Traditional Chinese Medicine (TCM) sector has joined the global fight against the pandemic, actively expanding cooperation between China and Brazil on innovation in traditional medicine while promoting access to Sichuan TCM in the Brazilian market. The session promoted not only TCM but also Sino-Brazilian cooperation against the pandemic by sharing the front-line experience of tackling Covid-19, thus contributing to building a community with a sense of shared destiny. During the session, specialists took an in-depth approach to various topics, such as: clinical treatment methods using both TCM and Western medicine; the evolution of the pandemic; and Covid-19 prevention and control. Pragmatic and efficient exchanges took place, laying a positive foundation to future cooperation and exchanges.

Mr Vong Lap Fong, Member of the Board of Directors of the Monetary Authority of Macao, pointed out that the financial regulator had granted “countercyclical” lines of credit to Macao banks that had a large proportion of local business. The Macao SAR Government had taken advantage of development opportunities brought by the “Belt and Road” initiative – while supporting also the development of the Guangdong-Hong Kong-Macau Greater Bay Area, and boosting contacts in Portuguese-speaking Countries – in order to give full play to the city’s role as a financial services platform between China and the Portuguese-speaking Countries. He also stated that the modernisation of Macao’s financial sector was being promoted, along with various initiatives in areas such as infrastructure, regulation, and talent training, to help the Macao economy grow in a more stable and sustainable manner.

Mr Cai Chunyan, Deputy General Manager of the Bank of China Macau Branch, said the financial institution had promptly responded to the Macao SAR Government’s call, implementing several measures to help stabilise the economy, and assisting the Macao SAR Government in the emergency procurement of supplies to prevent the spread of Covid-19. The bank had also spared no effort in ensuring that financial services were available as normal, given the important role that the financial sector played in assuring residents’ well-being.

The Managing Director of CNOOC Petroleum Brasil Ltda., Mr Nie Zhimeng, presided over the “Cooperation Against Covid-19 Using Technology” session, which featured representatives from mainland Chinese and Brazilian import-export chambers of commerce, and from institutions in the sectors of artificial intelligence technology, electronics, and TCM development and production. The representatives discussed online, among other topics: approaches on the use of anti-epidemic technology; technology for medical diagnosis; artificial intelligence; the use of virtual reality technology for epidemic prevention; online platforms for providing healthcare services; risks and opportunities in fighting epidemics; and product research for epidemic prevention.

This new Webinar series further promoted international dialogue, cooperation and coordination in combatting the pandemic. Forum Macao has supported the online and offline implementation of anti-pandemic initiatives, as a bridge and cooperation platform between China and Portuguese-speaking Countries. The Permanent Secretariat will continue to monitor closely the evolution of the pandemic, promoting a synergy between multilateral and bilateral initiatives, and actively supporting the Participating Countries of Forum Macao in responding to the challenges of the pandemic, fulfilling Macao’s role as a platform.

University of Macau creates award for best thesis in Portuguese