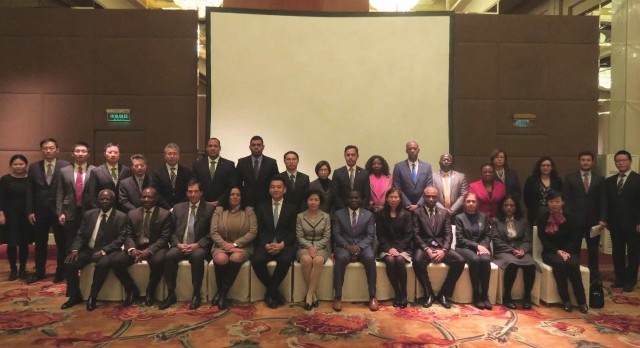 The second meeting of the “Working Group on Cooperation in Capacity Production” – under the Forum for Economic and Trade Co-operation between China and Portuguese-speaking Countries (Macao) – was held in Beijing on December 4.

The meeting was attended by approximately 30 people. They included representatives of: the Department of Outward Investment and Economic Cooperation and Department of Taiwan, Hong Kong and Macao Affairs of the Ministry of Commerce of China; the Ambassadors to Beijing of Portuguese-speaking Countries; as well as representative of Citic Construction Co Ltd; China Three Gorges International Corporation; Fosun International Ltd and of the Permanent Secretariat of Forum Macao.

During the meeting, Mr Hu Huajun, Coordinator of the Executive Office of the Permanent Secretariat of Forum Macao and head of the Working Group, briefed the participants of the Group about the tasks completed by it, including the visits to provinces in Mainland China and to Portuguese-speaking countries. Mr Hu additionally said that more than 10 business matching sessions on cooperation in capacity production have been organised in respectively Brazil, Cape Verde, Mozambique, Portugal, as well as in Hunan Province, Qingdao city, in China, and in Macao.

During the meeting, Mr Malam Sambu, the Ambassador of Guinea Bissau to China, has raised suggestions on industrial capacity cooperation between China and Portuguese-speaking Countries. Representatives from Citic Construction, China Three Gorges and Fosun International have also introduced their respective businesses and the successful examples of investing in Portuguese-speaking Countries, and shared their views on the expectation of future cooperation initiatives.

The Permanent Secretariat of Forum Macao has been actively implementing the “Strategic Plan for Economic and Trade Cooperation” as well as the “Memorandum of Understanding on Promoting Cooperation in Production Capacity” signed at the 5th Ministerial Conference of Forum Macao, Ms Xu noted in her speech at the meeting.

The Permanent Secretariat of Forum Macao is also fostering the 18 new measures announced by China at the 5th Ministerial Conference of Forum Macao, with a view to contribute to the nation’s “One Belt, One Road” initiative. Cooperation in production capacity is amongst these key new measures.

The Permanent Secretariat will continue to organise and participate in activities focused on cooperation in capacity production in Mainland China, Portuguese-speaking Countries and Macao, in order to promote further the cooperation amongst the countries participating in Forum Macao.