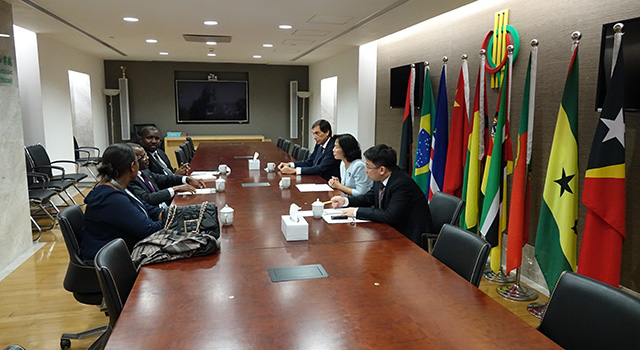 Secretary-General Ms Xu welcomed Mr Neves to the headquarters of the Permanent Secretariat of Forum Macao. She thanked the Government of São Tomé and Príncipe for judging as important the work of Forum Macao, and for actively promoting cooperation with China.

Ms Xu also praised the successful hosting in São Tomé and Príncipe of the 14th Entrepreneurs Meeting for Commercial and Economic Cooperation between China and Portuguese-speaking Countries – 2019.

She highlighted the importance given to cooperation on traditional medicine in the Strategic Plan for Economic and Trade Co-operation of the 5th Ministerial Conference of Forum Macao. Ms Xu called on all parties involved in Forum Macao to make the most of their individual advantages and develop a model of cooperation most appropriate to each country, using Macao’s platform role to boost cooperation in fields such as healthcare and culture.

Minister Mr Neves said São Tomé and Príncipe had a privileged geographical location with access to a regional market of 200 million consumers. He added that São Tomé and Príncipe’s health indicators ranked top among countries in West Africa. The country had unique advantages – including abundant traditional medicine resources – with potential to be explored, he added.

The Minister also vowed to make use of Forum Macao’s role as a multilateral mechanism in order actively to explore cooperation with China in the fields of scientific research and human resources training, to advance industrial development.