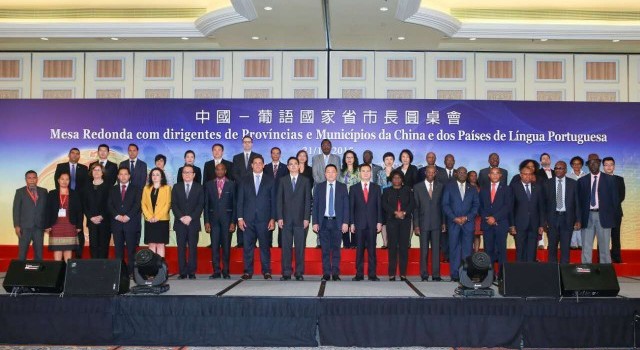 The Roundtable Meeting between leaders of Provinces and Municipalities of China and those of Portuguese-speaking Countries took place on the afternoon of October 21, at Cotai Expo, the convention and exhibition centre of the Venetian Macao. The Roundtable Meeting was organised by the Forum for Economic and Trade Co-operation between China and Portuguese-speaking Countries (Macao), also known as Forum Macao.

Participants in the Roundtable Meeting included the Macao SAR’s Secretary for Economy and Finance, Mr Leong Vai Tac; the Director-General of General Affairs Department of the Commissioner of China’s Ministry of Foreign Affairs in Macao SAR, Mr Zhang Jian; the Secretary-General of the Permanent Secretariat of Forum Macao, Mr Chang Hexi; Angola’s Ambassador to China, Mr João Garcia Bires; the Secretary to the Municipal Government of São Luís in Brazil, Mr Luiz Carlos de Assunção Lula Fylho; the President of the Municipality of São Miguel, on Santiago Island, Cape Verde, Mr João Gomes Duarte; the Deputy Director-General of the Provincial Government of Guangdong, Mr Zhang Aijun; Guinea-Bissau’s Ambassador to China, Mr Malam Sambu; the Governor of Tete Province in Mozambique, Mr Paulo Auade; the President of the Municipality of Tondela in Portugal, Mr José António Jesus; the Municipal Administrator of Manatuto in East Timor, Mr Fernando Domingos de Almeida e Sousa Júnior; and the Head of the Trade Office of the Economic Affairs Department of the Liaison Office of the Central People’s Government in the Macao SAR, Ms Gong Youying. The Macao SAR’s Secretary for Economy and Finance delivered a welcoming speech.

This Roundtable Meeting – the inaugural edition – is one of the highlights of this year’s event calendar for Forum Macao. The activity aims to boost exchanges and co-operation among local governments – at state, city and regional level – of the participating countries, contributing to an improvement in mutual understanding. The Roundtable was moderated by the Secretary General of Forum Macao, Mr Chang Hexi.

During the Roundtable, participants shared their experiences and exchanged views on how to attract foreign investment. Each of the participating representatives gave a presentation about their locality.

The hosting by Macao of this Roundtable helped consolidate contacts between the various local governments of the participating countries. It also helped enhance Macao’s role as a co-operation platform.