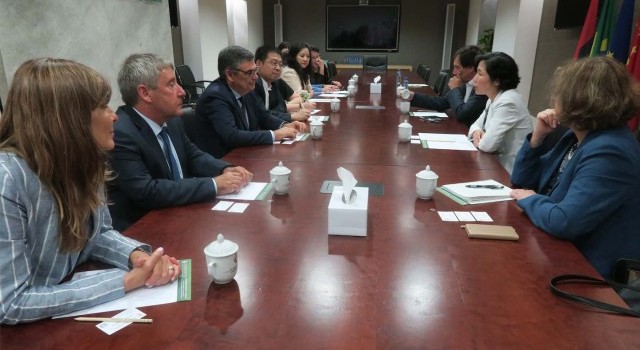 The Secretary-General of the Forum for Economic and Trade Co-operation between China and Portuguese-speaking Countries (Macao), Ms Xu Yingzhen, had a meeting on July 11 with the Rector of the University of Lisbon, Mr António Manuel de Cruz Serra, and the President of Macau High Technology Exchange, Mr Lu Songlin. The meeting was also attended by Deputy Secretary-General of Forum Macao, Mr Rodrigo Brum, and Portugal’s Representative in Forum Macao, Ms Maria João Bonifácio.

Mr Serra and Mr Lu each made a brief presentation about the respective operational strategies of their organisations. Both sides said they would seek to take advantage of Macao’s role as platform between China and Portuguese-speaking Countries, in order to establish a partnership between the University of Lisbon, the University of Shanghai and Macau High Technology Exchange, with the aim of creating an International University of Sino-Portuguese Innovation.

Forum Macao’s Secretary-General said she hoped the initiative would achieve positive results, stressing that such a project would in itself represent an innovative model of cooperation between China and Portuguese-speaking Countries in the field of education. Ms Xu said additionally that the Permanent Secretariat of Forum Macao would support the realisation of such an initiative.