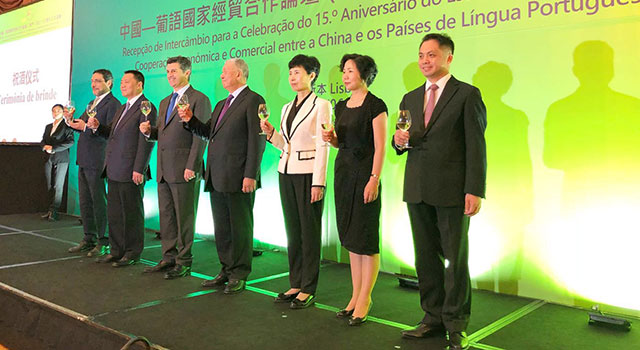 The Vice-President of the Chinese People’s Political Consultative Conference, Mr Edmund Ho Hau Wah; Portugal’s Minister of Economy, Mr Manuel Caldeira Cabral; Vice-Minister of Commerce of China, Ms Gao Yan; and the Secretary for Economy and Finance of the Macao Special Administrative Region (SAR) Government, Mr Leong Vai Tac, attended the reception and gave speeches. Other guests were also present at the reception, among them Portugal’s Secretary of State of Tax Affairs, Mr António Mendonça Mendes; the Chargé d’Affaires of the Embassy of the People’s Republic of China in Portugal, Mr Xu Zhida; and representatives of the Diplomatic Corps of Portuguese-speaking Countries.

Vice-Minister Gao praised the achievements made by Forum Macao over the past 15 years, noting that the influence and cohesion of Forum Macao was growing day by day with the joint efforts of all involved and the active support of the Macao SAR Government. She also pointed out that economic and trade cooperation between China and Portuguese-speaking Countries had achieved remarkable results, and that advancement of Macao’s Platform role continued. The Vice-Minister reiterated her commitment to the principles of “Uniting Efforts towards Cooperation, Jointly Building the Platform, Sharing the Benefits of Development” under the “Belt, and Road” initiative; and to working with the Portuguese-speaking Countries to share development opportunities. This would lead the cooperation between China and Portuguese-speaking Countries to a new phase of high-quality development, enabling those countries to join forces to make Forum Macao a worldwide example of cooperation under the “Belt and Road” initiative, with the ultimate goal of better contributing to the well-being of the peoples involved.

Mr Cabral said that Portugal would provide China with feedback regarding the latter’s “Belt and Road” initiative. He added that – with the assistance of Macao’s Platform role – Portugal could be promoted as a country of many business opportunities. As such, investment by Mainland Chinese and Macao business people could be encouraged in Portugal, and this would further promote the economic development of Macao, China and Portuguese-speaking Countries, as well as improving cooperation ties between these partners.

Guests from, and representatives of, various places, associations and companies expressed high appreciation while at the event, for the role that Forum Macao had played over the past 15 years and praised the results achieved, discussing in some depth the construction of the Platform, and of strengthening economic and trade cooperation between Mainland China, Macao and Portuguese-speaking Countries, as well as the promotion of Macao’s adequate economic diversification and sustainable development.