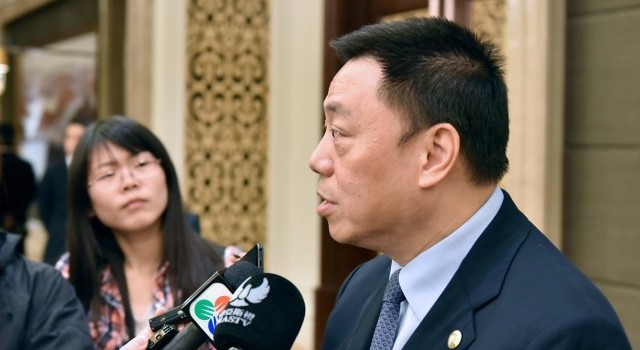 The Secretary for Economy and Finance, Mr Leong Vai Tac, said today (April 21) the visit to Fujian had achieved practical results in facilitating enterprises in the two places and in cross-boundary investments, further leveraging Macao’s advantages in the Portuguese-speaking countries.

Speaking to reporters at the end of his two-day visit, Mr Leong said aspects of co-operation explored included MICE (meetings, incentives, conventions and events), finance, trade, tourism and culture, during the meetings with Secretary of the Fujian Provincial Committee of the Communist Party of China, Mr You Quan, the Governor Mr Su Shulin, and Vice-Governor Mr Zheng Xiaosong.

In the new phase in Fujian-Macao co-operation, the Government would step up the review of related legislations and work achieved in the past, and invite Fujian enterprises to Macao in a move to diversify the structure of the economy.

This is in line with the President Xi Jinping’s advice on strengthening Macao’s own competitiveness and boosting regional co-operation, especially with neighbouring cities such as Guangdong and Fujian.

The Fujian Pilot Free Trade Zone (FTZ), which was launched today, and the country’s plan to build Fujian as a core area of the 21st Century Maritime Silk Road, will bring further opportunities for Fujian-Macao co-operation.

Mr Leong said the Government would make more efforts in promoting FTZ here, including organising visits to familiarise Macao’s businessmen with the latest developments in the area. Macao’s network in the Portuguese-speaking Countries will facilitate Fujian in establishing co-operation with those countries.

Upon the launching of different FTZs, the Government would study cautiously their different functions, especially their roles in the country’s strategic development of the Silk Road Economic Belt and the 21st Century Maritime Silk Road (“Belt and Road”).

Macao’s close ties with the Portuguese-speaking Countries would bring complementary advantages in the co-operations with different FTZs, he said.

Mr Leong was appointed by the Chief Executive Mr Chui Sai On to represent the Government on the Fujian-Macao co-operation.