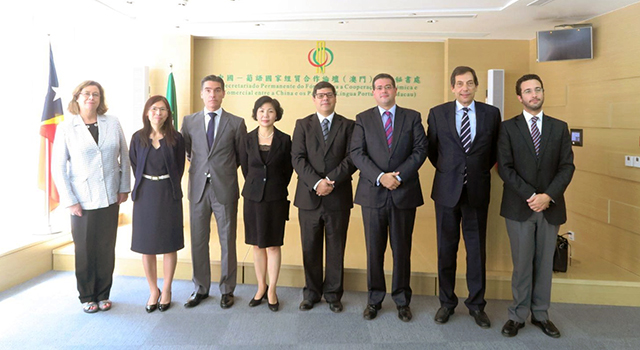 A delegation from Portugal headed by the country’s Secretary of State of Internationalisation, Mr Eurico Brilhante Dias, visited the headquarters of the Permanent Secretariat of the Forum for Economic and Trade Co-operation between China and Portuguese-speaking Countries (Macao) on October 17. The group was joined by the Consul General of Portugal for Macao and Hong Kong, Mr Vítor Sereno.

Ms Xu welcomed Mr Brilhante Dias and gave the group a brief presentation on the activities carried out by the Permanent Secretariat of Forum Macao. The sides exchanged views on the cooperation framework agreement recently signed between Companhia de Seguro de Créditos, SA and the Monetary Authority of Macao; and on the services to be offered by the new Youth Innovation and Entrepreneurship Centre for Young Entrepreneurs in China and the Portuguese-speaking Countries.

Both parties agreed to strengthen exchanges and cooperation, by making use of the advantages offered by Macao as a financial service platform, and by making use of the Youth Innovation and Entrepreneurship Centre, in order to foster cooperation and promote the development of small- and medium-sized enterprises in Portugal, Mainland China and Macau.